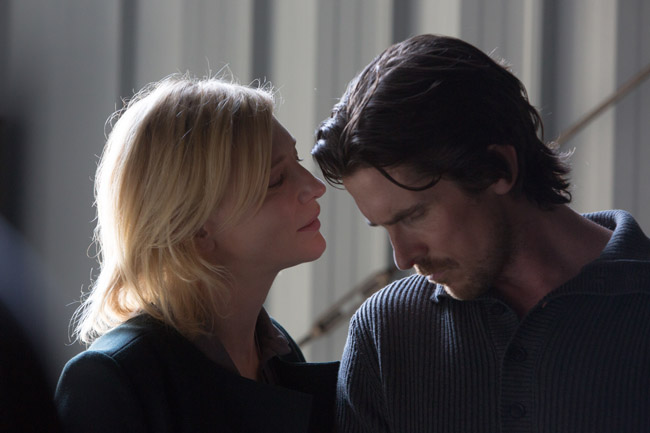 STUDIOCANAL has released the trailer, and FOUR new clips from Terrence Malick’s KNIGHT OF CUPS, which is out in UK cinemas on Friday, May 6th.

Cast your eyes on the visually spectacular trailer which has an air of glamorous beauty and crisp cutting edge cinematography seeping out of its very pores.

Knight of Cups is Directed by Terence Malick and has an all star cast ensemble in Christian Bale, Cate Blanchett, Natalie Portman, Wes Bentley, Imogen Poots and Frieda Pinto.

Rick (Christian Bale) is a comedy writer living in present-day Santa Monica. He longs for something other, something beyond the life he knows, without knowing quite what it is, or how to go about finding it. He doesn’t know which way to turn.

The death of his brother, Billy, hangs over him like a shadow. His father, Joseph (Brian Dennehy), bears a sense of guilt for Billy’s death. A surviving brother, Barry (Wes Bentley), down on his luck, has just moved to LA from where they grew up, in Missouri. Rick has been helping him get back on his feet. Rick seeks distraction in the company of women: Del­­la (Imogen Poots); Nancy (Cate Blanchett), a physician he was once married to; a model named Helen (Freida Pinto); Elizabeth (Natalie Portman), a woman he made pregnant; A stripper named Karen (Teresa Palmer); and a young woman who helps him to see his way forward, Isabel (Isabel Lucas).

Women seem to him to know more than he does. They bring him closer to the heart of things, closer to the mystery. The highs haven’t added up. The parties, the dalliances, the career, none has satisfied. And still each woman, each man he’s met through the course of his life has served him in some way as a guide, a messenger.

The road to the East stretches out before him. Will he set forth? Will his courage fail him? Will he stay awake? Or will he let it all be just a dream, a hope, a passing fancy?

The journey has just begun.

KNIGHT OF CUPS is released on May 6th