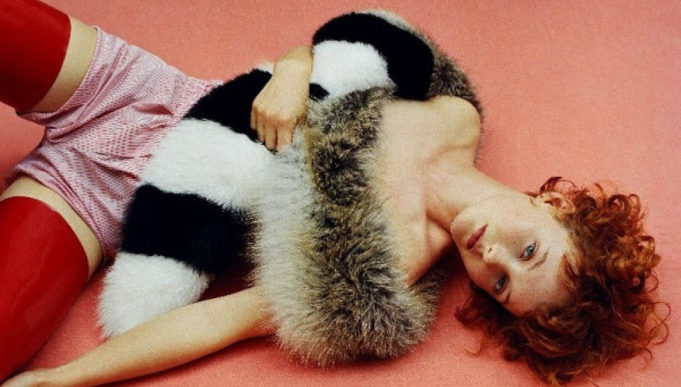 ‘Like A Woman’ is the long-awaited follow-up to Kacy’s 2015 debut EP, BLOO, containing the viral hit “Arm’s Length” along with “Foreign Fields,” which broke the Top 5 on Spotify’s Global Viral Top 50 chart.

“Hard to Love,” produced by Stuart Price, and the album title track “Like a Woman,” produced by DJ Mustard, were revealed on May 12th as the first two singles from Kacy’s upcoming new album.  They were followed one week later (on May 19th) by the premiere of the video for “Like a Woman.”

Arizona native Kacy Hill first fell in love with music as a member of the Vanessa Beecroft-curated performance troupe for Kanye West’s Yeezus tour.  Kanye was quick to sign her to his G.O.O.D. Music/Def Jam imprint, and offer his mentorship and advice. Results are heard on “Hard to Love,” a sweet song about being let down, as Hill’s voice is front and center, tender and pleading.  “Like a Woman” is a passionate, slow-burner, building gently before it opens up to give Hill’s voice room to breathe.

“‘Like A Woman’ is an exploration of my own femininity and sexuality,”

“I want my audience to have a similar experience of their own while listening.  My goal is not to make a statement, but make space for exploration without shame or guilt.  I don’t speak for all women.  I speak for Kacy Hill.”  At Kanye’s suggestion, Kacy has made serious changes in her sound and her story as an artist: focusing on her voice, finding her own melody, and writing from the parts of her heart that she had previously kept close.  The songs on ‘Like A Woman’ are about intimacy, longing, heartbreak, and exploration.

Hailed by Sunday Times Culture as “piano-flecked R&B at its most beguiling has steadily built her buzz over the past two years – Top 10 on the Dazed & Confused Readers’ 100 List, features on debut albums by Travis Scott and Cashmere Cat, a collaborator on Kid Cudi’s album, the cover of V magazine’s music issue, and several fashion spreads in Vogue.  Last month alone, Kacy could be found in Elle’s ‘Women In Music’ issue, a huge spread in Flaunt, and a main feature in Crack Magazine.

As Kacy Hill’s story continues to unfold, and her already-impressive buzz continues to grow, the stage is set for the breakthrough of one of 2017’s most exciting artists.