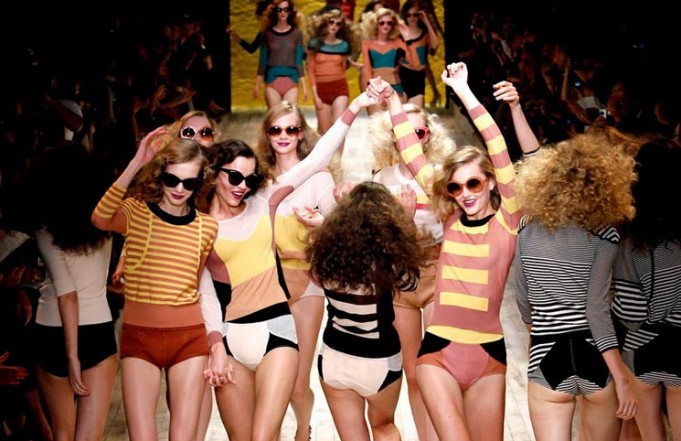 Paris brought to a close more than 4 weeks of collections after New York, London and Milan. More than 90 shows, over 9 days, the French capital reinforced yet again its place as the fashion capital of the world, with each day holding strong shows, eclectic presentations and creativity.

Each day brought bundles of emotion and striking images, started by the spectacular show at the Grand Rex where Jean-Paul Gaultier signed off his last ready to wear line after 38 years of creation. With humour and talent, he’s inspired by the popular theme Miss France, and delivers to the catwalk astounding fashion, with a realist homage, to famous fashion editors… Designers and close friends were all in attendance to celebrate this happy ending!

Another ending, this time for Christophe Lemaire, who stays true to himself and leaves after 4 successful and loyal services of artistic director at the Hermès house with elegance and discretion…Despite the rumour surrounding Guillaume Henry, he didn’t want to confirm straight away his departure of the Carven brand. He had to wait until the end of his collections to confirm his arrival at Nina Ricci.

Peter Copping leaves his place to maybe join Oscar de la Renta. At Mugler, after the departure of Nicola Formichetti, the expectations were huge and David Koma did not disappoint. At Sonia Rykiel, the arrival of Julie de Libran seemed to carry a breath of fresh air to the brand. The palm buzzed with the number of tweets sent, about the fashion house Chanel and to the parade of girls on the Chanel Boulevard, constructed especially for the occasion under the nave of the Grand Palais. After the success of the supermarket, Karl Lagerfeld succeeded to surprise yet again. Another exceptional decor, was at the Louis Vuitton Foundation which welcomed the Louis Vuitton show under the direction of Nicolas Ghesquières.

He presented an impressive collection full of propositions and ideas, all inspired from the past. Taking from the past to better understand the future, is equally the belief of Raf Simons for Christian Dior. The riding coats borrowed from the 18th century took on a new lease of life. Lanvin celebrated 125 years of the house with one of the most successful collections in Paris Fashion Week. With not just one but multiple propositions to satisfy the happiness of all women.

To the trends: jeans, the 70s, a mix and match of volumes and materials, khaki and navy, and plays with transparency, will be the stand out pieces for summer 2015. A summer season with twists and turns, and borrowed elements, all with a creative and contemporary energy. And the test of attention this season was more so the clothes worn by the celebrities, only Kanye West and Kim Kardashian caused the flashes of photographers…

Interview: Jean-Paul Gaultier: It’s not the end it’s the start of other things, I believe it’s good that I’m stopping, it’s the turn of the young ! Interview: Alber Elbaz: It’s the last season but it’s done with serenity, with a feeling even like a certain accomplishment, there isn’t any bitterness, from either side. Interview: Christophe Lemaire: Women are always inspiring, I think that this collection was particularly touching. Free Music / Bandit & Nikit