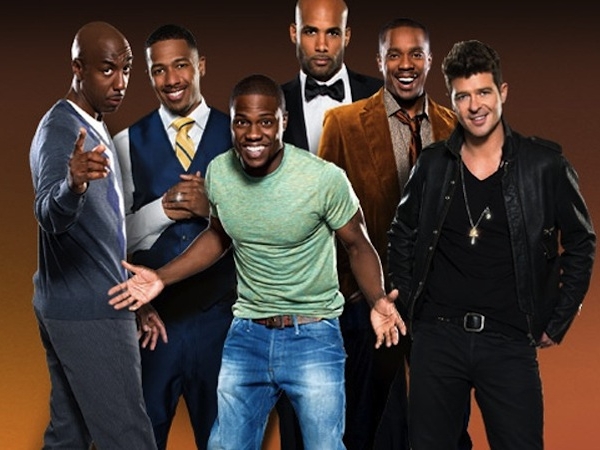 With Kevin Hart as the lead character of a group of men which includes Nelly, Boris Kodjoe, Robin Thicke, Duane Martin, Nick Cannon, and J.B. Smoove, RHOH is shaping up to be the funniest reality show that we’ve seen in a very long time — or as Hart says “the first un-reality show.”

The BET series kicked off last night to rave reviews. The cast are playing “very over-the-top” caricatures of themselves but it is very funny. Watch the trailers below.

RHOH began as a spoof that aired during the broadcast of the 2011 BET Awards mocking the over the top antics often seen on reality television shows. Now it is poised to transform comedy, according to Hart:

We’re mocking what everybody makes fun of on a regular basis. It’s ridiculous. They’re fighting. They’re going back and forth. We’re putting a group of men together that are talented enough and aren’t afraid to make fun of themselves. We’re catty. We’re not getting along. We’re getting along. We’re friends. We’re not friends, but we’re doing it in a fun way. It’s unique. It hasn’t been done, which means it will be big.

“It’s good, it’s original, it’s something different and it’s fresh for BET,” Hart told MTV News of the mockumentary-style show, which debuts on Tuesday night (January 15). “I can’t even say that it’s a comparison because it’s so different. Our job is to make fun of the ‘Basketball Wives of L.A.,’ ‘The Real Housewives of Orange County.’ You’re seeing a bunch of fake drama. It’s all drama between a bunch of men who act like women.”