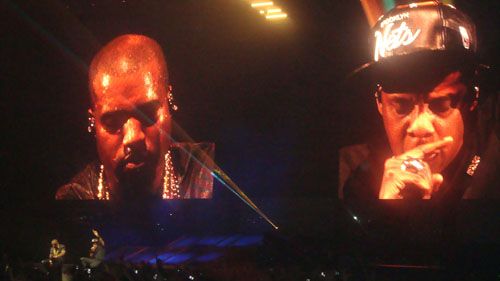 More than 20,000 people watched as Ri-Ri came on stage to sing All of the Lights from Kanye’s 2010 ‘My Beautiful Dark Twisted Fantasy’ and Jay-Z’s Run This Town. The Roc Nation songstress doesn’t appear on the pair’s album and is the first artist aside from the headliners to appear during a Watch the Throne performance.

She tweeted: ‘#RihannaNAVi made historih tonight as the first person to Watch The Throne AND join it!!! No one is allowed on that stage! Thank u guys’

Rihanna wasn’t the only celebrity addition in the house. Kanye’s girlfriend reality star and model Kim Kardashian watched the show from a special VIP area.

The dynamic duo completed 40-song sets during their O2 arena run performing tunes from their respective solo catalogues and hits from ‘Watch the Throne’. The hip-hop heavyweights applied a tag-team approach to the proceedings performing together and heading on and off stage while they each performed their solo material and coming back together to showcase tracks off their joint album.

The show kicked of with the two rappers standing on opposing platforms elevated above the crowd, wearing “all black everything’ as they began with H.A.M. They then returned to the main stage to perform ‘Who Gon’ Stop Me’ and ‘Otis’ together with a huge American flag behind them.

Engaging visuals such as rottweilers, animals attacking their prey, riots and much more were displayed on two screens throughout the show alongside assortments of changing flashing lights. Jigga kicked the solo sessions off with ‘Where I’m From’ and ‘Jigga What, Jigga Who’. A professional performer, the 42-year-old put on a polished, controlled performance, with his reserved energy giving him the superiority of a big brother to ‘Ye.

On the other hand, Kanye was snarling, screeching and rapping on his knees at points of the show, giving us a raw performance that you could feel across the dome. Although they both had a strong solo playlist, Kanye prevailed in his showcase of his contribution to pop culture as he performed tracks such as ‘Can’t Tell Me Nothing’, ‘Flashing Lights’ and ‘All Falls Down’.

Catering across the board, Jay-Z made the rap fiends happy as he performed hip-hop classics such as ‘I Just Wanna Love You’ ‘Big Pimpin’’ ’99 Problems’ ‘On To The Next One’ and more. Kanye made the ladies smile with a quick set from his ‘808’s and Heartbreak’ album, which saw him perform ‘Heartless’ and ‘Runaway’.

It ended with the 34-year-old looking pretty emotional as he sang “If I told you I don’t like the way your hair looks tonight, don’t listen to me baby, cause I’m an asshole…”

A powerful moment came when Louis Armstrong’s ‘What A Wonderful World’ blared through the speakers as images of riots, the KKK and general destruction were displayed. The rappers kept their backs to us, watching the images themselves and letting us soak up the unspoken statement on the irony of America’s patriotism as ‘No Church In The Wild’ began.

This show was the third in succession that the rappers had played at the O2 Arena and the evening was rounded off with the duo closing with Ni**as in Paris. As some people began to leave thinking that the concert was over the pair returned for an encore and performed the track a whooping five more times. ‘Bet you’ve never been to a concert where a song is performed 6 times,’ says Ye.

‘I guarantee this will be the greatest concert of your life’

Overall, Jay and ‘Ye gave us a phenomenal exhibition showing us why they have dominated the music scene over the past 10 years. They successfully gave us a clear insight into their world, letting us feel their potent power and their strong connection to not only each other, but to their audience.

At the beginning Kanye bragged ‘I guarantee this will be the greatest concert of your life,’ and by the end of the night I concluded that he was actually right.

Who Gon’ Stop Me

Welcome to the Jungle

Jigga What, Jigga Who (Originator ’99)

Can’t Tell Me Nothing

On to the Next One

Dirt Off Your Shoulder

I Just Wanna Love U (Give it to Me)

All of the Lights guest starring Rihanna

No Church in the Wild