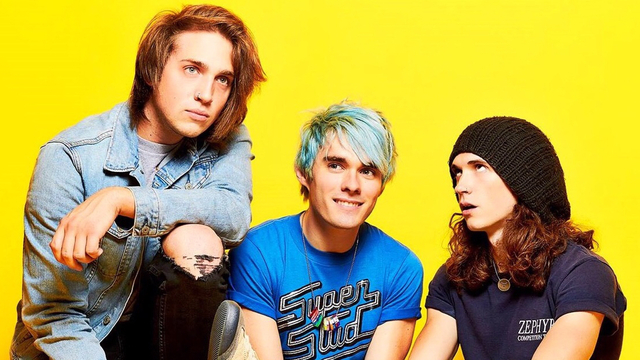 All the way from Houston, Texas Waterparks are finally here in the UK embarking on their headline tour.

I sat down with Awsten, Geoff and Otto before their headline show at The Underworld in Camden.  We talked all things from sex, music and Nandos.  I told the lads about the massive queue outside the venue and they couldn’t believe it.

A- It’s going good, loving the UK. Nothing new but I’ve had Starbucks a few times.

A- Ew no because Cheeky Nandos grosses me out.

You probably get asked this all the time but what inspired your band name?

A- Sure, Interesting story! It’s embarrassing and I don’t want my parents to know but we basically all had our first kiss in a waterpark.

A- It’s also the first place I cummed.

*Awks * Thanks Awsten for putting that picture in my mind.

A- We met in 2012 and I already knew Otto because we both went to the same Halloween party and we were dressed as the same person. We both dressed up as Hamburglar and Geoff likes hamburgers.

You released your album Double Dare nearly a year ago, what inspired the album and did you face any challenges when creating the record?

A- Nothings really hard when Geoff is around, we wanted to choose some songs but they couldn’t go on the album.

G- Deciding what to put on the album was the hardest.

Any new music coming our way?

G- we’ve just finished album two. If it was up to me I’d release it tomorrow

You have toured with many great bands like Good Charlotte and All Time Low, is there one band that you would like to tour with?

A- S cleaner version for this band

What makes Waterparks stand out from other bands?

A- A lot of bands don’t work on their physique like Geoff. He has a great butt

What has been your most embarrassing moments on stage?

A – Usually when I speak, I’m an awkward person.

What’s next for waterparks?

A- And album two