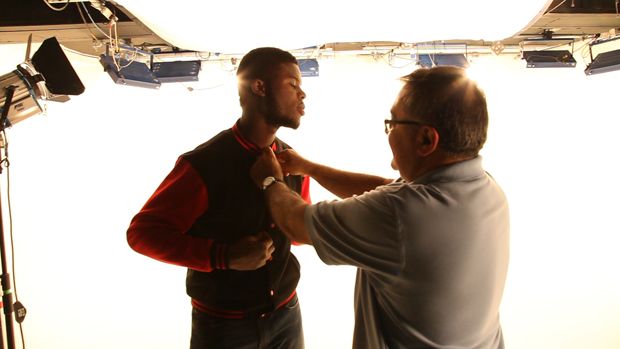 Using film as a technique to instigate change in a radical way, six young men invite you on a journey this summer which promises to enlighten, educate and inspire. With the uncomfortable, yet familiar backdrop of gang culture and its affiliations, 247365 promises to emulate the ‘real’ story on the streets, through the eyes of ex- gang members, without fictional elaboration, special effects or psychological perspectives.  To get the story behind the vision, Flavour met up with Director and Producer, Duro ‘2020’ Oye. Emanating assertiveness, fervour and drive, Duko talked to us about this life changing project, his motivation and why this film is one to watch this summer.

Three objectives: To make a prevailing statement, invoke thought and wake the masses. Can you give us a little background about yourself?

I am 26 and originally from South London, but now I live in Canary Wharf. I graduated with a 2:1 degree in Graphics and Advertising at Bedfordshire University. I was blessed and lucky to come out with good grades with little effort, but then I wondered what I could achieve if I really applied myself. I’ve always been ambitious and although I had the money, cars and girls, I still wondered if there was more to life.

You were previously associated with a Gang, what prompted you to change?

I wouldn’t call it a gang. People from the outside might have perceived us like that, but from the inside we were a group of friends. For six years I rolled with them, then I reached the point where I realised that it was just pointless. As I matured, I started to see things differently and I think the change of environment, had an enormous impact on my decision to leave that lifestyle. University allowed me to be myself, as I didn’t know anyone there, so I was able to find myself and my individuality away from everyone else. I realised that I was happy with myself and did not really need a group of guys to feel comfortable. The film tells the story of young men who were once in rival gangs. How did they come together?

I don’t come from their territory, but the rivalry between the Peckham and Brixton guys has been going on for years. It’s strange to think that when they were on the streets, they used to shoot at each other. I think the Brixton guys changed first. Initially the Peckham guys were dubious and thought it was a front, but when they realised that the Brixton guys weren’t retaliating, they eventually changed too. They have been on this changed road for a couple of years now and realising that they were in the same boat, they contacted each other. In due course, they squashed everything and now they not only work alongside each other, but enjoy solid friendships.

What inspired you to make a film together?

There’s the film and the organisation I am starting as a result. The aim of the film initially was to spread the message and expose the side of gang life that most people fail to see. We all know there is a problem, but most programmes or documentaries never offer a solution. That is where we saw an entry. It is easy for people to build negative stereotypes and assume that every young person belongs to a gang and carries a gun, based on things shown on TV. We don’t have enough inspirational stories in the limelight. We wanted to shun the negative and highlight the people who have lived this lifestyle, but have chosen to turn their lives around. Throwing people in prison just makes things worse and new government schemes are not having an effect, so rather than sugar coating the issue, we thought it was time to actually tackle it! Can you tell us about the process and any obstacles you encountered along the way?

I called the boys and told them what I wanted to do and we all knew this was a big step. By shunning this extreme lifestyle, they had found the solution that was evidently working for them, so I wanted them to be a part of it. The boys tried to involve the government and get funding, but my mentality has always been that to get a job done properly, you have to do it yourself. I did not want outside sources amending, imposing ideas or changing things, as we wanted to create something real and hard hitting, without the input of experts or university professionals who professed to study ‘hoodiology’ (laughs). I told the boys I had some money and I wanted to invest it in the film, but that money soon ran out (laughs). The more we did, the bigger it became and with the help of extremely supportive friends and family members, we got the money!

This film is an opportunity for people who have actually lived this life to answer questions that plague most people. Like why they got caught up, or what would provoke a human being to pick up a gun and shoot someone else? What normal person would say that they represent an estate without owning property there? They talk about what pushed them to this extreme and use the film as a way to depict their thought processes. This is not about talking to the camera; it’s about revisiting their old areas, talking about past incidents and even showing us how they got shot at. There is an even balance between comedy and reality, because whilst some stories may appear comical, they are real. In one segment, they took me to the local store in their estate and it is boarded up, simply because the shopkeeper got tired of being robbed. There is also a big section where we address the riots, consider whether it could happen again and look at way the government handled it with the sentencing. What do you think makes this film different?

How many people have actually sat down with a gang or ex-gang members and asked them to expose their thought process and simply tell the unequivocal truth. In my opinion, that has never been done.

If there was one lesson you could pass on to anyone on road right now, what would it be?

Think about your life and what you want from it! For a lot of young people, the pull is the money, but how much can you actually make on the streets? The money I used to make is nothing in comparison to the honest money I make now and it feels great. When you are making money on the streets, it is hard to let go of it, because you know what you had to do to get it. You have to weigh it up and consider how valuable your time is. People waste their time on the road, forgetting that once you’re dead, people forget about you. Sit and think for a minute, if these guys were able to change, (and some of them were the extreme), then you can too. 247365 will be previewing on the 28th August, but check out WWW.247365CHANGE.COM for the trailer and further updates