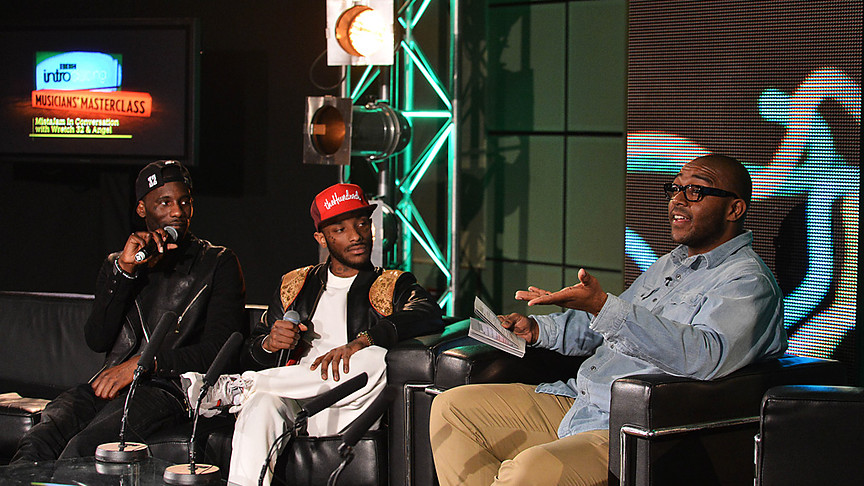 Maida Vale Studios in West London was a buzz with unsigned and undiscovered artists yesterday (March 21) when they were given the opportunity attend the BBC Introducing Masterclass, a scheme aimed at supporting new music talent.

The session was attended by record label bosses, A&R scouts and individuals invited after being nominated by their local BBC Introducing station.

Social media, the music industry and how to promote your music were just some of the topics covered, the master classes were packed with tips and insight for unsigned musicians, given by industry professionals, artists, DJ’s and presenters from across the BBC Radio family.

We also got the chance to interview two of the most successful and influential rappers in the UK. Devlin and Wretch 32. We gave them some short and sweet questions about the session and also got the scoop on what they’ve got planned in the near future. Check out what they had to say.

What made you want to get involved with the BBC Introducing Masterclass?
Devlin: I know what its like, when your coming up and your writing and you are trying to get a break, it feels like your just alienated from the rest of the world. I was at any youth club or open mic that I could be at. It was nice to come down. I was blown away, there was some really good talent out there today.

Wretch 32: The first stage at a festival that I performed on was the BBC introducing stage, so whenever something like this comes up I’m always in. I really wanted to come down today because I can’t express how much I want to share, I wanna see everybody make it, especially if they’re working hard. I wanna see it happen for them. What did you think of the atmosphere in the studio?
Devlin: I was surprised how confident everyone was when they jumped up to perform. I still get nervous now but they were jumping up like its nothing. It was a good thing to be a part of.

Wretch 32: I think it was good , sometimes people drift off, but I didn’t see anyone drifting off today, which made me know that everyone was listening, and that’s a good thing, they are really digesting it and its great.

What did you think of the unsigned acts that took to the stage & did you have a favourite?
Devlin: I think Rob Green was amazing, he was confident up there, laughing and smiling, He’s really good at what he does.

Wretch 32: I had a favourite, the last act, the guy who came on with the Guitar,Owen, he was really good, I’d be interested in hearing some of his stuff. I liked that they all had the confidence to come up on stage, it’s not easy to go up and perform with a band, they done very well.

The majority of the acts were male, with only 2 girls performing, do you think females are under represented in the UK?

Wretch 32: I want more girls. It’s weird, even with me, I work with more male vocalists than female vocalists, maybe because, for me, when its executed right has a deeper passion, but obviously Emeli is passion for me period, nobody’s gonna top that. I’m a massive fan of A.Dot, she’s coming through now. I love that girl to bits. But I do want to see more females come through.

Devlin: I suppose, that’s down to the females. It would be nice. The 2 girls that came up did their thing today.

Do you have any advice for emerging/unsigned artists who are struggling to break in to the industry?
Devlin: You got to have thick thick skin. You’ll have people tell you that you’re not built for it. You can take advice but keep your vision, don’t let people put you off what you want to do. You’ll meet the right people, my people have been wrapped around me for 8 years.

Wretch 32: Work work work, keep going.Nothing ever happened over night, if it does, it’ll be gone by the morning. I didn’t have a plan b, if it had not of worked now, I’d would still be going, I’d still be trying to find a way. Never give up.

The rappers also let us know what is in store for us soon.

Devlin has a new single coming up with singer Etta Bond and will also be performing at live at Koko on the 30th of April. He’s currently working on a mixtape so listen out for that.

Wretch 32 hopes to collaborate with some female artists, he is also in the process of pushing unsigned artists under the Renowned Group, specialising in management, publishing and film. Wretch is a founding member of Renowned as well as one of its artists.

On the 21st of March, BBC Introducing held workshops and masterclasses in London, Salford, Glasgow, Cardiff and Belfast.