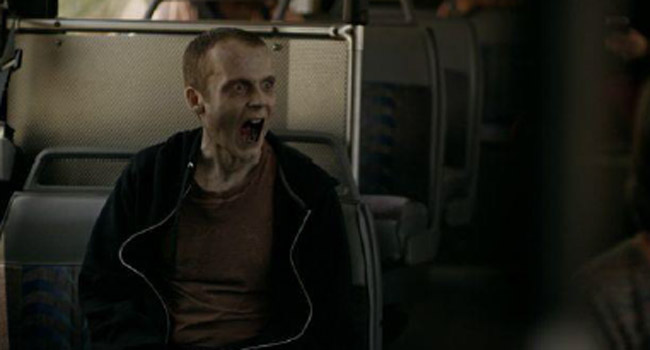 As we become more spoilt with methods of watching films, the act of actually choosing anything to watch is quite unbearable.

New streaming service Shudder aims to cut through the noise and reach those on the hunt for the best of a wide range of horror films, consisting of platform exclusives as well as general releases. Unable to see anywhere else, finding a film that stands out for you knowing it’s not widely available can feel like finding a real gem.
Shudder exclusive, We Go On, offers something different to blockbuster franchises of horror, and reaches out to those seeking the best of the genre. A fresh premise with a smart screenplay and an engaging lead, which is so often absent in this genre, is established solidly in the first act, and despite a little waning toward more cliches along the way, continues to uphold its worth.
Debilitated by his phobia of death, paranoid Miles (Clark Freeman) attempts to seek a solution to his pain by taking out a newspaper ad asking to be shown proof of the afterlife. Inundated with responses, Miles filters through the fakes with his mother (Annette O’Toole)  narrowing down three choices to visit and potentially become free of his crippling fears.
Miles’ sense of terror is both captivating and relatable, manifesting in the character, the performance, and the story as a whole. As a lead character, it’s so important that we believe what he’s going through not only when looking at him, but at the world and story around him, too, which in this case was crafted well. Miles’ fear, anxiety, curiosity, and desperation build an intricate character, particularly for a horror film, and adding O’Toole’s role as a mother really allowed the layers to be explored. Unfortunately, the supporting cast didn’t quite shine as brightly as Freeman, allowing him instead to steal the show; but at least they provided worthy performances to maintain the standard set by him.
It’s a shame that We Go On may receive a relatively small audience due to its platform, as the story alone far surpasses poor efforts that receive wide release. However, the sense of a film like this flying low and being stumbled upon gives it another layer of authenticity and buzz. While most definitely not a masterpiece or a classic, it’s certainly a breath of fresh air to see a horror film being given a sense of depth and thought, especially when coupled with a complex character and an original take on the supernatural sub-genre.
We Go On is available on Shudder February 23rd.