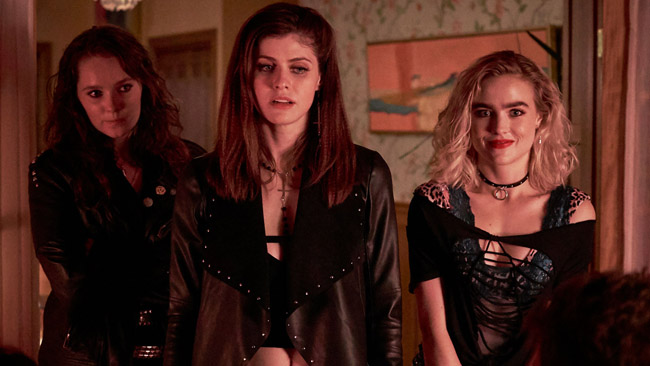 Despite the title, there is nothing supernatural about this fluffy horror, just a bit of a murder spree of predictable boredom.

You don’t have to look far for one of the most deceiving titles to hit feature films. You might expect a harrowing story of devil worshippers performing ritualistic routines to conjure up demon spawn for their own pleasure. What transpires instead is a fluffy religious group on a bit of a murder spree of predictable boredom.

Set in the late 80s the story centres on 3 young women, Alexis (Alexandra Daddario), Val (Maddie Hanson) and Bev (Amy Forsyth). The set up for the main event drags on and on and on following these 3 ladies on the way to a rock concert, pairing up with 3 guys, Mark (Keenan Johnson), Kovacs (Logan Miller) and Ivan (Austin Swift) who just so happened to throw a milkshake out their van window into the path of their moving car, while heading to the same event. When the gig comes to an end the 6 want to keep partying but as the mundane party chat comes to an end, the blood bath begins to unfold.

Frustratingly, this follows those all too familiar tropes that come from these so-called horrors, don’t expect to see anything you haven’t seen before, except for one tiny element that writer Alan Trezza (Burying Your Ex) has flipped and reversed it. However, that twist comes as a lone ranger that simply cannot save the day when the storyline is so thin it breaks at the first stab. Just like Troll’s World Tour, Rock/Heavy Metal music is classed as the evil/devil’s music, making this the catalyst for the murder spree to ensue; it’s a deeply disturbing notion that filmmakers are basing their stories around this whole connotation.

With any low-budget offering, locations are kept to a minimum as are cast members, Jackass veteran Johnny Knoxville turns up as a sadistic priest – an addition that the filmmakers surely saw as a route to a potential sequel. Allison McAtee has the smallest of parts as an intoxicated step-mother who alongside a cop get caught in the crossfire. The cast put in decent enough performances, and work extremely well with the material they’ve been provided.

Exasperatingly, this fails on so many levels and provides way too many opportunities, in its short running time, for minor distractions to take you away from the film, only to return and you’ve missed absolutely nothing.