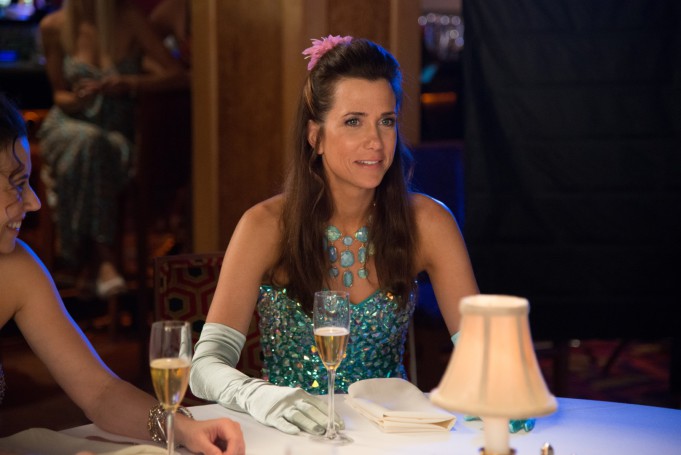 In Welcome to Me, Kristen Wiig, along with her unique deadpan humour plays Alice Klieg, a woman with a borderline personality disorder who wins the lottery and proceeds to buy her own TV show in a subdued yet surprisingly watchable film which has women at the very forefront of its creativity.

Directed by Shira Piven, Welcome to Me doesn’t hang about too long in getting this story into full swing.  We are introduced to Alice sitting at home watching recordings of her beloved Oprah reciting every sentence word for word. Before long, Alice is holding the winning ticket to an $86 million lottery jackpot and quickly goes about changing her life in the most extraordinary ways. For one, she moves into a casino complex as her new home. Against her Doctors orders, she quits taking her medication, ends up in the audience of a low-rated TV show where she proceeds to give the most bizarre monologue which has the crew so mesmerized they keep rolling the cameras. Having grabbed the attention of the studio owner (James Marsden), who just so happens to be low on funds and needs a healthy cash injection, she pitches her idea of her own chat show. The subject of the show, Alice Klieg, with only the thought of the money he agrees and she casually writes out a cheque for $15 million to get the show up and running.

If this wasn’t completely bonkers enough for you the fun is only starting to begin with her show taking to the air. Not only does she open her show arriving on a swan boat but the format see’s her show cut into segments. From cooking food that regulates the mood to having younger actresses re-enacting her life as she watches on from the sidelines either angrily reacting to the portrayal of herself or bursting into uncontrollable crying. At times, the show feels like her own therapy session. Wigg certainly does steal the show from the other veteran actors such as Marsden, Wes Bentley and Joan Cusack who all seem to take to the bench, but that doesn’t hamper in fact it enhances the storyline. Wiigs delivers that offbeat comedy without even breaking a smile. This self-obsessed troubled character seems to come so naturally to her. After a while, Alice gets so wrapped up in herself and her show – yes you wouldn’t actually think that’s possible but it happens – she fails to realise that her on-air actions have a detrimental effect on her relationship with her therapist (Tim Robbins) and her best friend Gina and her whole world seems to crumble all around her. How can she make this right again? Doing something extremely over the top, what else.

Welcome to Me quite obviously pokes the finger at fun at the narcissistic world we live in today especially with our different forms of social media laying the blame for this part of modern culture and that was exactly the aim of screenwriter Eliot Laurence.

Welcome to Me is out in Cinemas and exclusively on Sky Store on March 25.