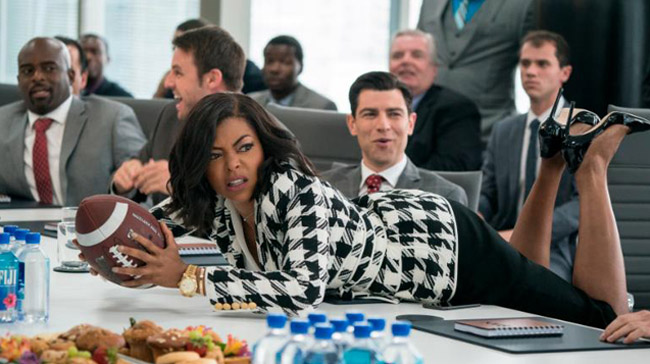 Except for ticking the right diversity boxes and a few funny moments, this isn’t even what women want let alone what men want.

In the wake of our current climate, the gender flip movie is becoming ever more prevalent. The latest in this unoriginal trend, What Men Want, takes Mel Gibson’s 2000 What Women Want in which, after an accident in a bath with a hairdryer, Gibson’s character could hear the thoughts of every woman around him, using his newfound ability to advance his career over a newly recruited female advertising executive.

Empire’s Taraji P. Henson steps into the lead as Ali Davis, a sharp-suited, sharp-tongued, arrogant career-obsessed Sports agent who has to fight tooth and nail amongst her male counterparts to get that much-coveted role as a partner in the firm. Except for the setting, the differences in attitudes are thinly veiled. Gibson was an egotistical sexist in his version and not much has changed amongst the male elite here. Anyone would wonder why women would be remotely interested in any of these men in the first place. Henson’s actually no different to her male competitors hammering home that for a woman to be able to get ahead in business she has to be devoid of any emotional baggage.

It couldn’t get any more formulaic if it tried from this point on. After being passed up for partner, she hits the town with her girls via a drug peddling psychic (Erykah Badu), gets blind drunk and takes a tumble on the dance floor, smacking her head. Enter her new find ability to hear men’s thoughts. Taking a few tips from Cameron Crowe’s Jerry Maguire in which Tom Cruise played a disillusioned sports agent who sets out on his own with the help of Rene Zellweger, the transparent plot heads in the same direction. Ali uses her new strengths to outmanoeuvre her co-workers to land the hottest new Basketball talent.

Amongst its predictability and the mish-mash mess of a romantic set-up, there are a few fun witty moments in the exchanges between Ali and her ‘super nerd’ assistant Brandon (Josh Brener) who knows a lot more about Sports than anyone gives him credit for. Brandon is Laurel to Ali’s Hardy. He even gets his own sub romantic plot with the office goofball played by Pete Davidson but if Ali wasn’t able to tap into those thoughts this could have been a lot less funny.

Just for good measure, Ali gets her own rom-com journey, which starts off with such hilarious promise as she picks up Will (Aldis Hodge), a hot barman who she takes home and has her wild rampant way with. This proceeds to him feeling uncharacteristically used when she turns over after the deed is done and falls into a deep sleep. It feels almost an afterthought by the filmmakers to use this route for Ali’s career advancement. She uses Will, who turns out to be a single father, to convince the father of the sought after Basketball star that family comes first too to just satisfy his own sexist views on women in the workplace.

We do border on reverse sexism, and Ali doesn’t really need those powers to read the minds of most of the men surrounding her, most are the egotistical pigs they so proudly wear on their sleeves anyway. The message this conveys most is that men are just not that complex, what you see is what you get; there simply are no nuances to be found, a bit like this film. Enough with the gender flip already.

What Men Want is out in cinemas March 15th.