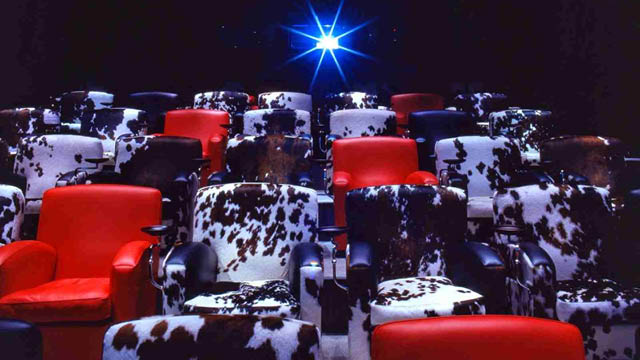 Cinema dates have been a courtship staple for nearly a century. Countless relationships have started or ended after great or terrible trips to the pictures.

In the early days of the movie industry, cinema dates were formal affairs, and couples would wear suits, ties and ball gowns with aplomb.

But times have changed, and so have cinemas. Now, there are so many different types of places to go on cinema dates, each with a different decor and assumption of formality on the part of the date-ees, that picking out an outfit can be more difficult than sitting through a screening of Titanic without crying. But don’t jump ship just yet. We will break things down to give you advice on what to wear for any different kind of modern cinema.

For those who miss the charm and sophistication of the cinema dates of yore, luxury cinemas give you the opportunity to relive the glory days of the silver screen. Independent venues like Shoreditch’s Electric Cinema or the cinema at The Sussex Exchange in Hastings offer a VIP cinema experience with restaurants and bars to boot.

At venues like these, it is important to dress as classy as your surroundings. Therefore, advice on what to wear on a formal dinner date also applies here. Feel free to pair dresses with sensible heels to create an image perhaps less smart than a red carpet, but much smarter than Netflix and Chill.

Men can dress up as well, as much as they possibly can before they start to look like it’s their wedding day. But remember, for both genders, it never hurts to be a little too formal.

Taking your date to an arthouse cinema indicates a level of sophistication and intelligence that you definitely want to maintain with your outfit. It’s no good going to see Werner Herzog’s latest documentary on the existential plight of sea urchins if you’re not going to wear appropriately-artisanal apparel.

Who What Wear’s guide to sophisticated outfits is a good place to start for women. Don’t be afraid to be experimental. For example, you could try wearing an oversized shirt and tucking it in, or even wearing sunglasses in the screen. Don’t worry about not being able to see the film properly; indie filmmakers probably expect their viewers to be dressed like this anyway, and shoot their films with this in mind.

Men should add a sophisticated edge to their outfits too. Instead of your boring blue jeans, try raw selvedge denim. It’s cooler, edgier, and, best of all, as the garment care expert Mr. Black says, washing raw denim is not recommended.

There’s nothing wrong with going a little mainstream—in your choice of film and your choice of outfit. When watching a blockbuster movie at a multiplex, you want to be wearing something you’ll feel comfortable can spilling popcorn on.

You’re likely seeing a sequel, remake, reboot or rehash, so there’s no need to worry about being original. No matter your gender, feel free to dress as casual and/or fun as you like. Ripped jeans, trainers, jumpers, or anything else comfortable will do just fine.