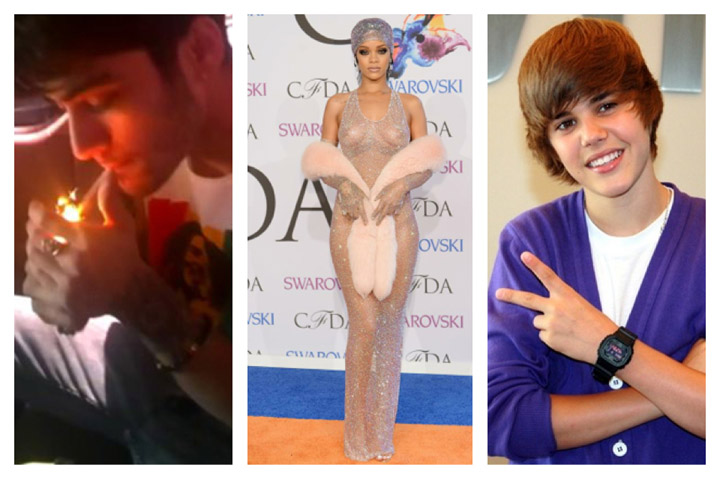 Over the past few days/weeks the press have been having the time of their lives with recent controversial behaviour from the likes of Justin Bieber, Rihanna and One Direction. I am amazed however that every article seems to headline with the “Role Model” title. When did signing a record deal mean signing a role model agreement as well?

I understand that kids today look up to individuals in the public eye but when, as a society, did we decide that musicians and music artists were those individuals that they should look up too? Is it the fact that they have success under their belts and the fact that some are extremely business minded, or is it purely just the fact that they are famous, hot and fashionable?
If celebrities, musicians and music artists are the individuals that our kids are going to consider as role models, as parents and a country, surely we should be teaching our kids that they are simply just normal human beings. Human beings who just got lucky or have some form of talent who, just like the rest of us, will make mistakes and bad choices along the way.
How can we expect these celebrities to be golden human beings who will never make a mistake or a bad choice? The pressure of being in the spot light is hard enough these days, is it physically impossible not to make spontaneous decisions that certain people may not agree with or believe in? You can’t make everyone happy all the time, can you?
Lets start with Rihanna. Whatever Ri Ri does is documented in the press, good or bad….Y? Because people love to read about her, people are obsessed with her. If you put her on the front of a magazine it is guaranteed to sell more copies than normal. However, Rihanna is a bad girl who plays on her bad girl card and enjoys it. She dresses provocatively, smokes dope and is covered in tattoos. Should we judge? No, because as a human being she has a right to live her life as she pleases. Recently Rihanna attended an awards ceremony in a clear see through dress leaving pretty much nothing to the imagination. I was amazed at how shocked everyone seemed though. Have you not seen her photo shoots and music videos? This is in typical Ri Ri fashion. The RnB singer has, on numerous occasions, stated that she is not a role model and does not want to be one. She is simply a girl living out her dream career and enjoying her life. Who are we to tell her how she should or shouldnt live her life?
Moving on to Britain’s own, One Direction. Recently a video leaked across the internet with two members smoking joints. The press, yet again, went wild with the story and parents have even decided not to allow their kids to attend their up coming concerts. Personally, I can’t really see the big deal. Yes drugs are bad, but most people try them at least once in their life. I am not condoning drugs but weed is far from an A class drug. One Direction are young adults who started their careers as young teenagers. They need time to grow up and make mistakes just like normal kids do. Just because they are growing up in the spotlight does not mean they are doing anything different to most youngsters across the globe. The difference is that they have people waiting on the edge of their seats to document it when they do.
Finally I would like to highlight the on going drama with pop star, Justin Bieber. Basically this kids career is spiraling out of control and fast! His most recent controversial drama is a video, from a few years back, where a young Bieber is making racist jokes and remarks. I do not agree with racism in any shape or form and nor do I condone it. However, he was extremely young and should not be getting flack for his past mistakes. Especially mistakes made when we was so young. It is clear that the pop star has since grown up from then, i know his recent actions may not highlight this, and learnt about the hurt and heartache that racism causes. He has since been educated and understands the difference from right and wrong, when it comes to racism. Im sure most people, in one shape or form, have made remarks in their past that they are no longer proud of. The difference is, ours are not front page news. His mentor and long life friend is Usher, an African American RnB singer, this speaks volumes in my opinion. The likes of 50 Cent and Chris Brown have both stated that JB is not a racist and that he just made a very childish mistake in his past. If Usher, Chris and Fiddy aren’t holding grudges or judging, should we?
The kids of today will always have an “Idol” or “Role Model” from the public eye that they choose to look up to. Whether they are music artists, footballers, celebrities, actors or even politicians. These individuals are only human beings who will, at some point in their lives, make a mistake just like all of us. Should we really put pressure on these individuals to show the kids of today how to behave and the differences between right and wrong, or should that be our job as a country and as parents?
What do you think? Let us know your opinions below and as always make sure to hit the follow button on twitter at @Flavourmag.
Words by Joe Waller
Twitter – @JoeWa113r