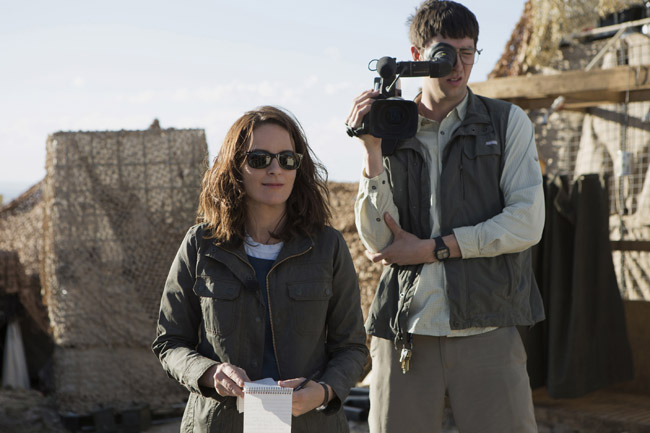 Whiskey Tango Foxtrot isn’t a straight forward comedy like you would think with Tina Fey taking the helm; it’s actually based on a true story of Kim Baker, a nothing special US domestic news copywriter who offered herself up for a trip to Afghanistan to cover a story.

One of the problems with Whiskey Tango Foxtrot, It’s not quite sure what it wants to be, does it fall under the comedy umbrella or something a little more serious? with some of its highly topical and serious drama. Throw in a love interest between Kim and Scottish photographer Iain (Martin Freeman) and we have a bit of a romantic comedy for good measure. The other problem, it drags on far too long, running just under 2 hours, which will make you reach for the time wondering how long it has left. The story starts in 2002, docile reporter Kim Baker (Fey) and her fellow childless colleagues with no real commitments, are called into a meeting by their Editor who is looking for volunteers to head to Afghanistan. Kim decides she needs to shake things up so puts herself up for the assignment. Once in Kabul, she is allocated a fixer, a local man by the name of Fahim – a bearded Christopher Abbot – and an extremely good looking ‘Aussie’ bodyguard Nic (Stephen Peacocke) – who flexes the Pecs at any chance he gets. Her living quarters – a dorm like base which doubles up as a newsroom for all journalists – including the ‘15’ Margot Robbie – covering the conflict and somewhere to party.

Kim – with no real experience in the field – has to start from the bottom with comedic effect, especially when she is assigned to a troop of US Marines under the command of Billy Bob Thornton – who delivers some of the best one liners – As soon as bullets start flying at their convoy and Kim disobeys orders to stay in the car to film the battle, she becomes instantly hooked on the adrenaline pumping through her veins, leading to an addiction to finding the perfect story. The story isn’t solely based on the adrenaline junkie plot but it tries to tell us the story of a woman who thought she was one thing but slowly starts to ‘find’ herself while involved in a highly competitive and volatile situation. Directors Glenn Ficara and John Requa have also tried to turn the seriousness of war into something a little more light hearted with a questionable soundtrack of songs that in any other setting would be highly inappropriate. They even poke fun at the Burqa subject when Fey has to wear one on a trip to Kabul, a bright blue one in fact, which she calls a mystery Ikea bag.

Martin Freeman in his role as photographer Iain is fantastic; playing a Scottish lothario type character at first, soon finds himself falling for Baker. Margot Robbie plays the one of the few other female reporters who befriends baker only to stab her in the back in a crucial career moment. We also have Alfred Molina playing a lecherous Afghan politician who takes a shine to Baker and tries to blackmail her for his own perverse needs. Whiskey Tango Foxtrot with its hint of feminism and female oppression throughout, Fey may have just found the role that could define her career after many films in which she has shown a bad lack of judgment.

Whiskey Tango Foxtrot is in UK Cinemas May 13