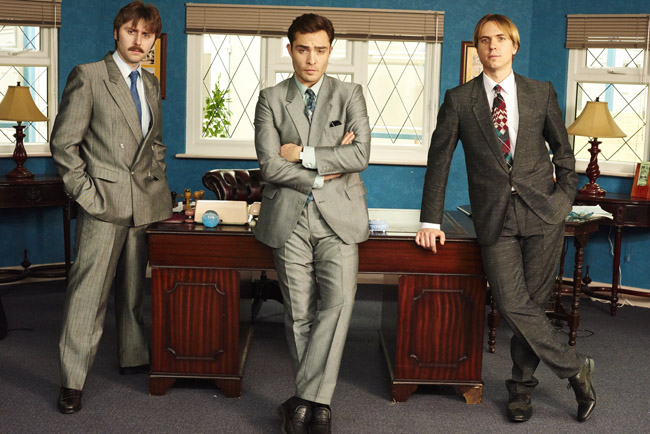 BBC Two’s hilarious new comedy, White Gold has a brand new trailer, if you’re a fan of the Inbetweeners you’re going to love this new series.

Set in Essex in 1983, the series perfectly captures the atmosphere of the era through the inner-workings of a double-glazing showroom, led by Vincent Swan (Westwick), a smart, handsome, charismatic salesman who will happily break the rules if it guarantees a sale. His team includes Fitzpatrick (Buckley), a smarmy reprobate who can charm the life savings out of anyone, and Lavender (Thomas), a failed musician whose crippling politeness and moral backbone has a habit of getting in the way of a sale.

It’s a story of dodgy shenanigans, scams, and petty rivalries – alongside free-flowing drugs, cash, and sex.

Filled with a classic soundtrack of hits from the period including tracks by Rod Stewart, Hall and Oates and Ian Dury, WHITE GOLD is a blast from the past with top-notch production design (Miranda Jones, Episodes, Catastrophe) and costumes (Caroline Pitcher, The Inbetweeners, Coupling).


White Gold will TX on BBC Two later this month and the full series will be available on BBC iPlayer. The DVD will be out on 3rd July.