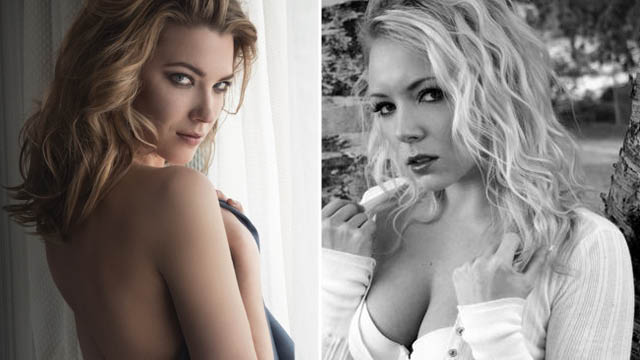 I somehow managed to stumble on this corny trailer of Insectula starring Arielle Cezanne & Sarah French (AKA Scarlet Salem). Insectula is a horror/comedy that’s an ode to the B-Movies of the 50’s – 70’s.

Yes I know the trailer is awful, its so corny and yet towards the end of the trailer, I thought to myself, maybe I would see this movie. why? Well its got hot girls like Arielle Cezanne & Sarah French (AKA Scarlet Salem) its got gore, silly straplines and all the other attributes you would expect from a movie like this.

But rather than focus on the movie, if you had ever read my blog before, you will know what direction this article is going. Yes you got it. The girls. Its all about the girls. So let’s take a look at the 2 stunners that star in Insectula, Arielle Cezanne & Sarah French (AKA Scarlet Salem).

Arielle Cezanne plays Brittany Sax in Insectula, Arielle is a print and film model who has modelled extensively in Istanbul and Barcelona, as well as other cities in Europe and USA. Arielle has been featured in Esquire weekly edition and this is Arielle’s first feature film role.

Arielle Cezzane is also the Filmmaker Mike Peterson and Producer Danielle Cézanne daughter. The bombshell isn’t on twitter or instagram but I have managed to source this gallery of sexy photos of Arielle Cezzane.

Moving on we have Sarah French Aka Scarlet Salem.

If you have a thing for zombies, corps, terror and scream queens that Sarah French is the girl you need to follow. Her instagram is instagram.com/sarahfrenchonline/ and twitter is twitter.com/scarlet_salem and if you Visit sarahfrenchonline.com you can get to know her better and see some very sexy cheesecake photos!

I put together a small gallery to whet your appetite and dam, this woman is fine. I love the horror pics and modelling pics and music pics as Sarah has also been featured on many a music video too.