Why are women such bitches?  You know when you’re looking super sexy and you walk into a room and the women in there look at you with the type of distain that should be saved for war criminals Or a Kardashian.

Scientists wanted to now why, so they under took some research to find out why the jealous bitch gene exists.

To see how female students react to a rival, researchers brought pairs of them into a laboratory, for what they pretended was a discussion about female friendships. But the real experiment began when another young woman entered the room asking where to find one of the researchers 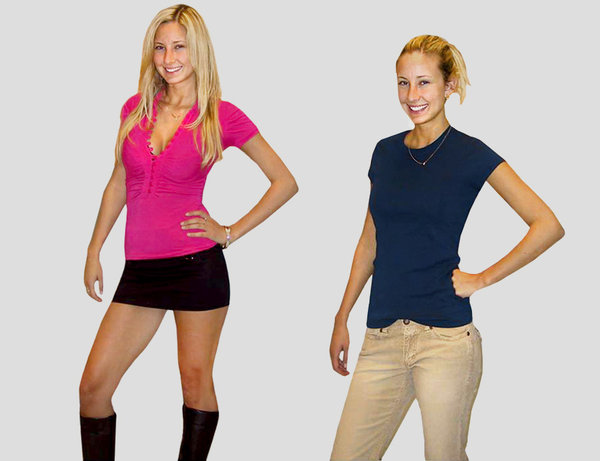 One of these outfits worn in Dr. Tracy Vaillancourt’s study on female aggression provoked a sort of “mean girl” form of indirect aggression. The other attracted little notice at all.

This woman had been chosen by the researchers, because she “embodied qualities considered attractive from an evolutionary perspective,” meaning a “low waist-to-hip ratio, clear skin, large breasts.” Sometimes, she wore a T-shirt and jeans, other times a tightfitting, low-cut blouse and short skirt.

In jeans, she attracted little notice and no negative comments from the students, whose reactions were being secretly recorded during the encounter and after the woman left the room. But when she wore the other outfit, virtually all the students reacted with hostility.

They stared at her, looked her up and down, rolled their eyes and sometimes showed outright anger. One asked her in disgust, “What the [expletive] is that?”

Most of the aggression, though, happened after she left the room. Then the students laughed about her and impugned her motives. One student suggested that she dressed that way in order to have sex with a professor. Another said that her breasts “were about to pop out.”

The results of the experiment was that this “mean girl” form of indirect aggression is used more by young women than by older women, who have less incentive to handicap rivals once they marry. Other studies have shown that the more attractive an adolescent girl or woman is, the more likely she is to become a target for indirect aggression from her female peers. “Women are indeed very capable of aggressing against others, especially women they perceive as rivals,” said Dr. Vaillancourt,  “The research also shows that suppression of female sexuality is by women, not necessarily by men.”

Stigmatizing female promiscuity — a.k.a. slut-shaming — has often been blamed on men, who have a  incentive to discourage their partners from cheeting. But they also have a incentive to encourage other women to be promiscuous. Dr. Vaillancourt said the experiment and other research suggest the stigma is enforced mainly by women.

“Sex is coveted by men,” she said. “Accordingly, women limit access as a way of maintaining advantage in the negotiation of this resource. Women who make sex too readily available compromise the power-holding position of the group, which is why many women are particularly intolerant of women who are, or seem to be, promiscuous.”

In traditional villages, people married at an early age to someone nearby, but young men and women in modern societies are free to postpone marriage as they search long and far for better options. The result is more competition because there are so many more rivals — and there’s no longer any scientific doubt that both sexes are in to win it.