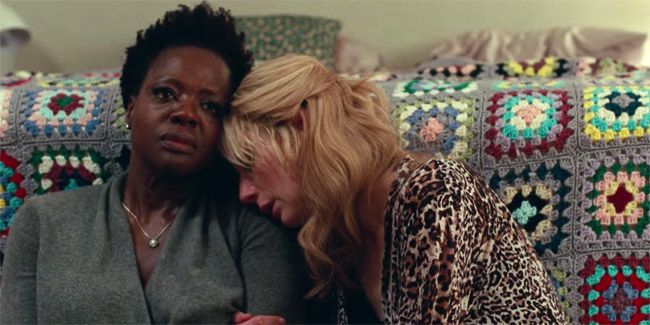 Acclaimed director, Steve McQueen may have had a five-year hiatus from the silver screen but his stylised eye for a gripping drama has in no way waned. Bringing together a crackling cast for his Lynda La Plante remake of Widow’s and setting it in a modern-day America makes for an explosive heist that will knock you flat on your back.

A blistering Viola Davis takes the lead as Veronica, a retired teacher and wife to Liam Neeson’s criminal mastermind, Harry Rawlings. Veronica is well aware of her husband’s criminal past time but chooses to ignore it until Harry and his gang are killed during a multi-million-pound heist from the local politician, Jamal Manning (Brian Tyree Henry) and his brother, the rival mobster Jatemme Manning – played with evil glee by an unnerving Daniel Kaluuya.

Under increasing threatening behaviour from Jatemme, Veronica finds herself the recipient of the plans for one of Harry’s carefully thought out jobs. Realising she can’t do it alone, she recruits the only other people she can think of that would need to get involved; The fierce and formidable widows of Harry’s gang, Linda (Michelle Rodriguez), Alice (Elizabeth Debicki), and Linda’s hard-up babysitter Belle (Cynthia Erivo).

Whilst Jatemme tries to get the money back to support his brother’s transition into politics, Jamal tries to keep his hands clean as he goes up against his rival, old-hand Jack Mulligan (Colin Farrell) who is man-handled by his overbearing stickler of a racist father Tom (Robert Duvall) – but where politics is involved, crime isn’t too far away.

Unlike most heist movies, McQueen engulfs Widows with an enriching story and character development. Each lady has a story to tell, weaving through the dark depths of their lives where male toxicity and abusive relationships rule. Depicted as timid woman where the men ruled the roost at first, as the job gathers momentum it becomes evident the women sparkle out of the shadow of their husbands and a couple may just surprise you along the way. McQueen makes it incredibly hard not to feel connected to these women and root for them every step of the way.

The female cast gives a rousingly violent performance and proves you should never underestimate a woman. Davis’s Veronica only proves that when she states “No one thinks we have the balls to pull this off!” While it’s not just the performances and plot that provide the engaging edge, McQueen indulges the modern-day setting with the respectful tones of the thriller’s gone by.

Gritty and ferocious, McQueen has you rooting for these ladies from the get-go, you feel invested in the story from the very beginning.