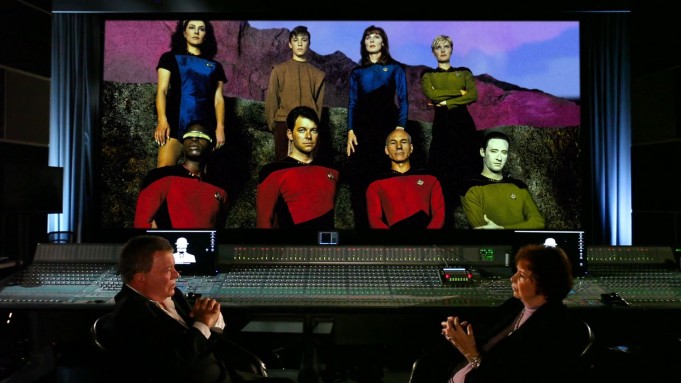 Tomorrow, Tuesday 4th August at 3pm Pacific Time (6pm ET & 11pm UK Time), for one hour, William Shatner will be on Twitter answering questions about the new documentary, which takes viewers inside the creation of Star Trek: The Next Generation.

With the release of Chaos on The Bridge, Writer, Director and acting legend William Shatner takes viewers inside the creation of Star Trek: The Next Generation, the bold attempt in 1986 to recreate the success of the original television series, through the eyes of the writers, producers, actors and executives who were involved. To promote the documentary on this classic tv series, you can get the chance to ask the originally captain Kirk that all burning question you’ve always wanted to know.

Uncovering the controversial creation of Star Trek: The Next Generation, William Shatner Presents: Chaos on the Bridge features interviews with the original cast: William Shatner (Captain James T. Kirk), Patrick Stewart(Captain Jean-Luc Picard), Jonathan Frakes (Commander William T. Riker), John de Lancie (Q), Denise Crosby (Lieutenant Tasha Yar), Gates McFadden (Dr. Beverly Crusher) and Diana Muldaur (Doctor Pulaski),as well as major players behind the camera who were involved with the production. Shatner takes viewers to the back lot of Paramount Studios, a mission control room at NASA, the theatre stage and the largest Star Trek convention in the world to reveal the never-before-told story of Chaos on the Bridge.  What emerges is a tale of power struggles, ego clashes, and most importantly, the legacy of the man behind the legend: Gene Roddenberry.

“Next year marks Star Trek’s 50th anniversary.” says Lise Romanoff, Managing Director / CEO of Vision Films, Inc.  “This insightful documentary is bound to strike a chord with both hardcore “Trekkies” and those who want to witness the ultimate creative forces of the production team behind this iconic sci-fi franchise at work.”

Fans can direct their questions to @WilliamShatner and use the hashtags #askShatner and #ChaosOnTheBridge to get involved.