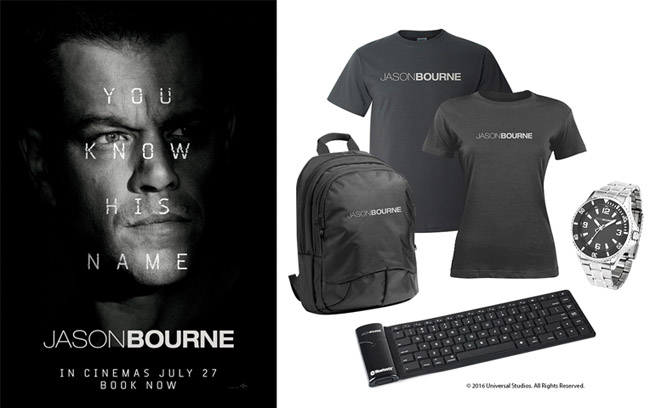 To celebrate the release of Jason Bourne in UK cinemas on Wednesday 27th July 2016, we’re giving away an exciting bundle of prizes including a branded ladies T-Shirt, men’s T-Shirt, rucksack, Bluetooth keyboard and a watch.

Matt Damon returns to his most iconic role in Jason Bourne. Paul Greengrass, the director of The Bourne Supremacy and The Bourne Ultimatum, once again joins Damon for the next chapter of Universal Pictures’ Bourne franchise, which finds the CIA’s most lethal former operative drawn out of the shadows.

For Jason Bourne, Damon is joined by Alicia Vikander, Vincent Cassel and Tommy Lee Jones, while Julia Stiles reprises her role in the series.  Frank Marshall again produces alongside Jeffrey Weiner for Captivate Entertainment, and Greengrass, Damon, Gregory Goodman and Ben Smith also produce.  Based on characters created by Robert Ludlum, the film is written by Greengrass and Christopher Rouse.

Email your name and address to comps@flavourmag.co.uk and make sure to add ‘Jason Bourne Competition’ to the subject line. Winner will be chosen at random on August 11th 2016. GOOD LUCK!