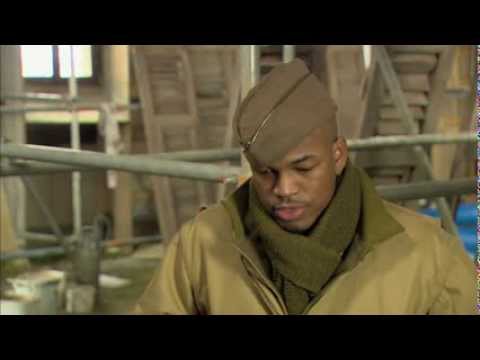 Inspired by the true story of World War II’s first African American fighter squadron, RED TAILS is a thrilling action-packed film with the most realistic dogfights ever to hit the screen. The much anticipated George Lucas project will be released in the UK and Ireland by Momentum Pictures on June 6th, the 68th anniversary of the D-Day landings.

Executive Produced by George Lucas, Produced by Rick McCallum and Charles Floyd Johnson, Written by John Ridley (THREE KINGS) and Aaron McGruder (THE BOONDOCKS) and Directed by Anthony Hemingway (THE WIRE), RED TAILS tells the tale of the heroic 332nd fighter group of the U.S. Army Air Corps who overcame racial discrimination to become one of the most distinguished squadrons in World War II. To celebrate the release of this epic action adventure, we are giving away a black 32GB Wi-fi enabled iPad 3!

To be in with a chance of winning watch the exclusive clip below and answer the following question:

What is the number on the side of Andrew “Smokey” Salem’s plane?

Please send your answer along with your name, address and phone number to comps@flavourmag.co.uk

1. Open to residents of the U.K mainland only.

4. Winner will be notified within 21 days of closing date by email that they have won the prize.

5. If the prize is not claimed within 21 days of notification, another prize winner will be drawn and the original prize winner forfeits the prize.

7. The prize will be arranged directly with the winner.

8. In the event the prize becomes unavailable, it may be replaced by one of equal or greater value.

9. One entry per household.

10. There is no cash alternative.

11. The prize is non-transferable and non-refundable

12. Promoter’s decision is final and in the event of a dispute, no correspondence will be entered into.

13. Prize draw not open to employees of (MEDIA PARTNER)., Momentum Pictures or its agencies.

15. The competition is being run, promoted and fulfilled by Promoter. Neither Lucasfilm Ltd. Nor any of its subsidiaries and affiliates are in any way a sponsor of the competition or responsible for any obligations in connection with the competition.

16. Copyright and Trademark notice: Red Tails™ and all characters, names and related indicia are trademark of & © 2012 Lucasfilm Ltd.