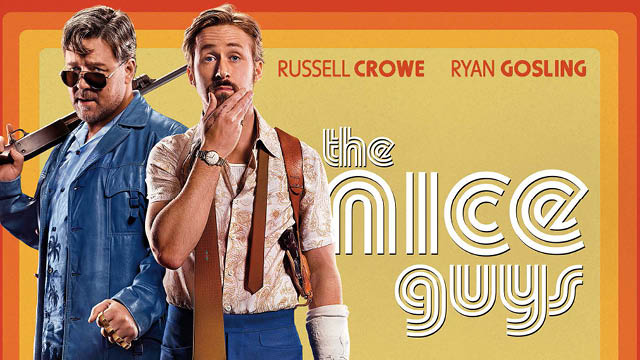 With the release of the hilarious The Nice Guys, starring Ryan Gosling and Russell Crowe on Blu-ray, DVD and Digital Platforms from the 26th of September we have three copies on DVD to give away to our readers.

Holland March (Ryan Gosling – The Big Short, La La Land) is a wise-cracking, down-on-his-luck private eye in 1977 Los Angeles, and a useless single parent to sweet and sassy daughter, Holly, who takes care of him. Jackson Healy (Russell Crowe – Man Of Steel, The Mummy) is a hired enforcer and debt collector who hurts people for a living. Fate turns them into unlikely partners after a young woman named Amelia (Margaret Qualley – TV’s The Leftovers) mysteriously disappears following the production of her ‘experimental artistic film’. Healy and March soon learn the hard way that some dangerous people are also looking for Amelia, and anyone else who gets involved in the case seems to be winding up dead. Before they know it, their investigation escalates into pandemonium, with dead bodies, wild parties and gun-toting car chases galore.

From the producer (Joel Silver) that brought you Lethal Weapon, The Matrix and Predator and genius director Shane Black(Lethal Weapon, Iron Man 3, The Predator) comes the most unlikely of comedic duos in a film that flaunts as much exhilarating action and slap-stick comedy as it does banter and wit. Complemented by an unforgettably funny breakout performance from newcomer Angourie Rice (Spider-man: Homecoming), THE NICE GUYS has a distinctively unique comedy that will have you laughing out loud over and over again.

To be in with a chance of winning one of three copies on DVD simply email your name and address to comps@flavourmag.co.uk and make sure to add ‘The Nice Guys DVD Competition’ to the subject line. Winners will be chosen at random on October 10th 2016. GOOD LUCK!

The Nice Guys, starring Ryan Gosling and Russell Crowe on Blu-ray, DVD and Digital Platforms from the 26th of September