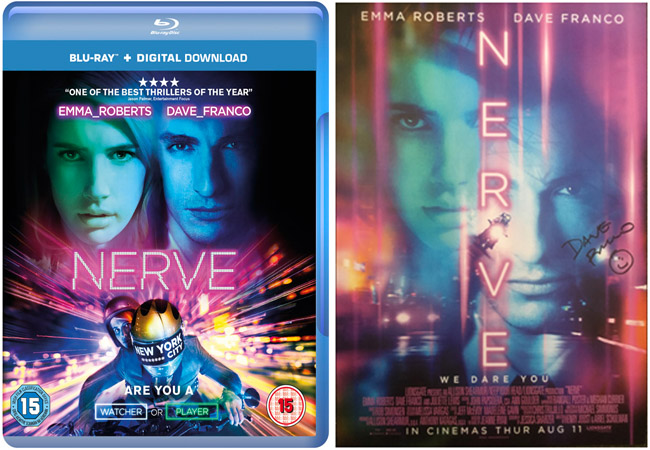 To celebrate the Home Entertainment release of the electrifying thriller Nerve, we have 2 Blu-rays and 2 posters and 2 books, signed by star Dave Franco, to giveaway. Pressured by friends to join the popular online game NERVE, Vee (Emma Roberts) decides to sign up for just one dare in what seems like harmless fun, but when she is partnered with a mysterious stranger (Dave Franco) she finds herself caught in the thrill of adrenaline-fuelled competition. When the game takes a sinister turn, with increasingly dangerous acts, Vee is lead into a high-stakes finale that will determine her entire future.

Bursting with adrenaline-charged action sequences, neon lights and an energizing soundtrack featuring music from MØ, Basenji, Crystal Stilts and BØRNS, NERVE is the must-have film to own this Christmas. Nerve is available to own on Digital Download on 4th December, and DVD and Blu-ray on 5th December 2016.

To be in with a chance of winning simply answer the following question:

Which Orange Is The New Black cast member also stars in NERVE?

To be in with a chance of winning a Blu-ray, Signed Poster and Book simply email your answer, name and address to comps@flavourmag.co.uk and make sure to add ‘Nerve Prize Bundle Competition’ to the subject line. Winners will be chosen at random on December 12th, 2016. GOOD LUCK!