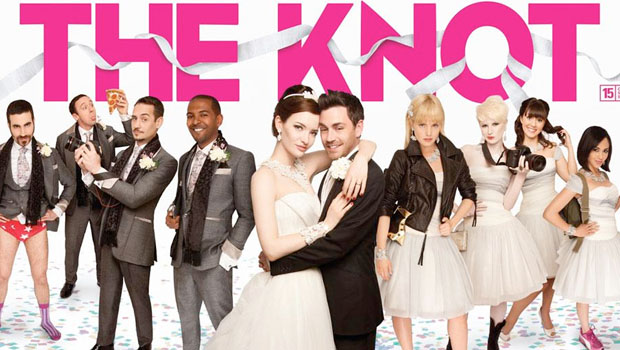 A must see for both guys and girls this Valentine’s Day, The Knot is directed by Jesse Lawrence (Mash Up) and co-written and co-produced by Noel Clarke, who also has a supporting role.

‘The Knot’ sees two London soul mates Alexandra (Talulah Riley) and Jeremy (Matthew McNulty) getting married. At least that’s the plan. Unfortunately for them, with the best men determined to pull a last minute prank and a car full of accident prone bridesmaids, making it up the aisle never seemed so difficult! Finding the happiest day of their lives beset with naysayers, missing bridesmaids, crashed cars, a trip to A&E, and a rather unexpected delivery, Alexandra and Jeremy seem destined never to become husband and wife. Determined that nothing can stand in the way of true love, the bride and groom embark on a wild ride across London with their friends, but will they make it to the church on time?

There are echoes of ‘The Hangover’ and ‘Bridesmaids’ in its depictions of male and female banter and the film stars some of the finest young talent from the US and the UK including: Mena Suvari (American Beauty, American Pie), Jason Maza (Fish Tank, Shifty) and Juliet Oldfield (Bronson).

We have five (5) blu-ray DVDs available to give to five (5) lucky winners. All you need to do is start following @Flavourmag on Twitter if you’re not doing so already and tweet the answer to the question below.

Which British actor, director and writer stars and co-wrote The Knot?

This competition closes at midday on Feb 14 and a winners will be chosen at random. Good luck.

The Knot is out on DVD and Blu-ray from today.