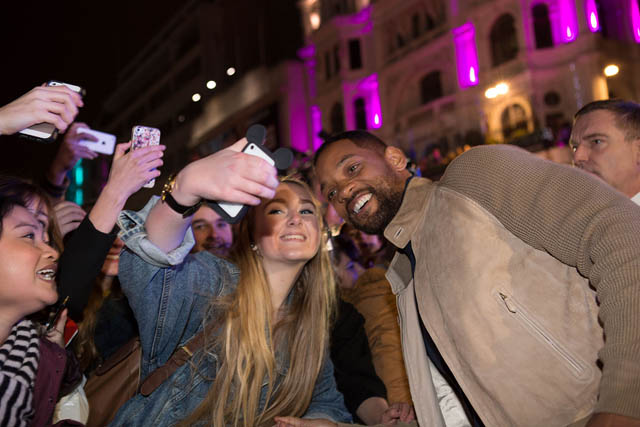 Thursday 12th of February on a chilly morning, Will Smith and Margot Robbie attended the London press conference for their new film Focus at the Kensington Roof Gardens.

Hosted by the lovely Edith Bowman, She had no chance in controlling Will when answering some awkward yet hilarious questions. The whole morning was extremely entertaining and even if Margot Robbie was a little quiet Mr. Smith certainly played the press well, he basically had us in stitches from start to end.

We’ve put together some of the highlights of the press conference for you, starting off with When we found out that Margot may look the sweet innocent type but from the moment she stepped on the set of Focus she took charge.

When asked how his character differs from the other superior roles with dubious morals, although this question stumped him a little his simply answer was “I guess I like the concept of dubious morals, he likes wearing that mask so no one knows who he is” in relation to his character Nicky in Focus.

Margot Robbie was then put on the spot and asked Leonardo Di Caprio or Will Smith?, which brought to the room an air of anticipation, Will Smith “Hang on a minute that is a good question, your honour would you please instruct the witness to answer the question” Margot Robbie “I can’t win with this, either way I’m going to get into trouble, both have extremely a lot in common….they both have huge profiles”  (riotous laughing) Will Smith “but one of us profile is larger than the others” Turning slightly red, the rest of Margot’s answer was extremely diplomatic, calling them both professional on set.

It was said there is a shortage of woman directors in Hollywood, is this something you want to go into. Margot Robbie “yes definitely it is an area I want to go into”. Will Smith “Oh she directed a large part of this one (laughs)” Margot Robbie “I swear I’m not bossy in any other aspect of my life just on set”

In your movies Will you always seem to have the most beautiful partners, Doesn’t this cause problems at home? Will Smith “hahaha very funny, when Jada found out Margot was doing the movie we went on the internet to see pictures of Margot and she turned round and said you better get in the gym. She said do not embarrass me on camera with this girl, get yourself together”

Will you mentioned before working in the studio with Kanye West, Is there a possibility of you doing a world tour, is that plausible?  Will Smith “I went into the studio with Kanye a couple of times, Just exploring, he’s pushing me a little bit” Margot Robbie “What about that rap you were writing on set?” Will Smith “sssssh, shes heard one or two things…. Come on I don’t know what’s happening with it yet I haven’t made that decision yet. I never stop recording and making records. I let Margot here something which was obviously a mistake (laughs), If Kanye has his way I’ll definitely be recording something this year”

TAKE A LOOK AT OUR GALLERY OF PHOTO’S TAKEN AT THE PRESS CONFERENCE.

Be the first to join in the con at an exclusive preview screening of action packed heist movie Focus, attended by the stars of the film Will Smith and Margot Robbie, in London on February 11th.

Click the player below to watch the live stream.

Check out of gallery of images from the Red Carpet of the Focus screening.

Will Smith stars as Nicky, a seasoned master of misdirection who becomes romantically involved with novice con artist Jess (Margot Robbie). As he’s teaching her the tricks of the trade, she gets too close for comfort and he abruptly breaks it off. Three years later, the former flame—now an accomplished femme fatale—shows up in Buenos Aires in the middle of the high stakes race car circuit. In the midst of Nicky’s latest, very dangerous scheme, she throws his plans for a loop…and the consummate con man off his game.

FOCUS IS IN UK CINEMAS FEBRUARY 27