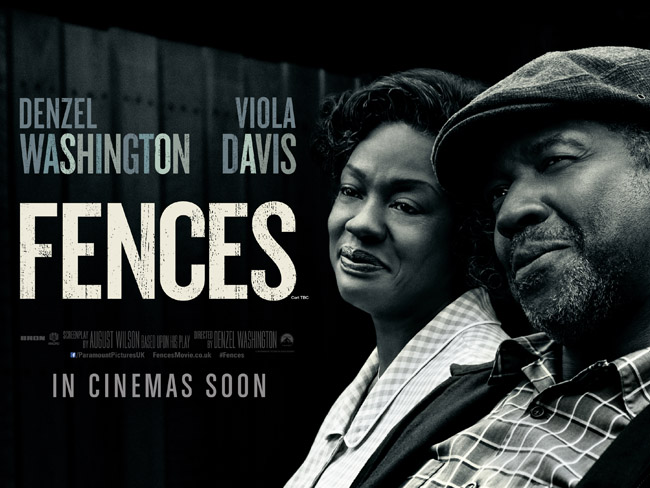 To celebrate the release of the Oscar-nominated Fences, – which saw Viola Davis walk away with the Best Supporting actress BAFTA last night – in selected cinemas now and cinemas everywhere February 17 (cert 12A).

We are offering 3 pairs of tickets to a special screening of Fences at Paramount’s headquarters in London on February 22nd, including food and drink.

Fences is the story of Troy Maxson, a mid-century Pittsburgh sanitation worker who once dreamed of a baseball career, but was too old when the major leagues began admitting black players. He tries to be a good husband and father, but his lost dream of glory eats at him, and causes him to make a decision that threatens to tear his family apart. Fences is directed by Denzel Washington from a screenplay by August Wilson, adapted from Wilson’s Pulitzer Prize-winning play. The film stars Denzel Washington, Viola Davis, Jovan Adepo, Stephen McKinley Henderson, Russell Hornsby, Mykelti Williamson, and Saniyya Sidney. The film is produced by Scott Rudin, Denzel Washington and Todd Black.

To be in with a chance of winning a pair of tickets, you have to make sure you are available to attend the London screening on the 22nd of February, email your name and address to comps@flavourmag.co.uk and make sure to add ‘Fences Screening Tickets Competition’ to the subject line. Winners will be chosen at random on February 19th, 2017. GOOD LUCK!

The Film starts at 7pm prompt, doors from 6.15pm, Feb 22nd. Nearest tube/train station is Gunnersbury. Address will be provided if selected as a winner.