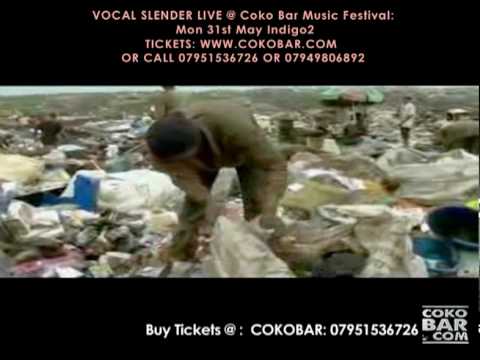 From Lagos rubbish dump to London’s O2: Vocal Slender from the BBC2 show Welcome to Lagos is set to perform at the IndigO2 on 31 May 2010

Nobody loves a real life success story more than us here at Flavour. Last month we saw Eric Obuh hustling as a “scavenger” on the first episode of BBC2’s three-part documentary series, Welcome To Lagos. Now the aspiring rapper known as Vocal Slender is set to perform at one of the world’s most prestigious music venues -London’s IndigO2!

As the cameras followed Obuh, 28, on the Olusosun rubbish dump slogging his way through scraps in order to fund his music career, viewers were given a real insight into what it means to be on the grind. Refreshingly, Vocal Slender’s story fascinated millions of viewers, including one of London’s biggest Nigerian promoters, who were also inspired and touched by his determination and optimistic approach which enabled him to see beyond the adversities faced in the ghetto. A few phone calls (and a flight to Lagos) and Vocal Slender was confirmed to perform at one of the hottest Nigerian shows: The Cokobar Music Festival, to be held at London’s indigO2 on Bank holiday Monday, 31 May. Prior to this confirmation, CokoBar Music Festival was already tipped to be a star-studded event with a spectacular bill of performing artists and now Vocal Slender has caused further anticipation as a special guest. Not only will it be his first performance abroad, he will also be sharing the stage with veteran Nigerian acts; Lagos’ Wande Coal (“Bumper 2 Bumper”, “You Bad”), Dr Sid (“Something About You”), Bracket (“Yori Yori”) and DJ Zeez (“Fokasibe”), plus London-based JJC (“We Are Africans”) and Tilla Man (“Pu’Yanga”); not the sort of bill you could expect to see him on in Lagos at present. To cement his arrival into the music scene, whilst in London, a professional music video for his single “Owo Yapa” has been scheduled to be shot as well, (kindly financed by Cokobar) setting him well on his way to,(in his own words) ‘…becoming somebody in the future’. Slumdog Millionaire aint got nothing on Vocal Slender – Nigeria stand up!

Flavour is giving our readers the opportunity to win tickets to one of the most anticipated afro-music events of the year. To win a pair of tickets to the Cokobar Music Festival simply write Vocal Slender in the comment box below and a winner will be chosen at random by 28 May 2010.