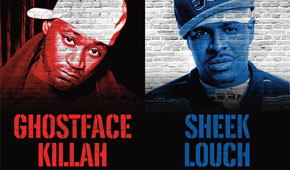 Fresh off the back from releasing their debut album; hip-hop heavy-weights Ghostface Killah and Sheek Louch will be in London to perform in a show that is a must for any true hip hop fan. We will be giving one of our lucky reader’s two tickets for the show at ‘The Garage’ on Tuesday 15th January. Separately these two rappers need no introduction. Ghostface Killah hailing from the most influential hip hop group of all time, Wu Tang Clan, brought together the cream of New York’s underground hip hop scene over 20 years ago and whose members are still a force to be reckoned with. Sheek Louch, who alongside Jadakiss and Styles P made a huge impact on 90’s hip hop with The Lox. The crew’s debut release, Money, Power & Respect. ranked at No. 1 in Billboard’s Top R&B/Hip Hop Albums, went platinum and included the momentous title track of the same name, as well as leading single ‘If You Think I’m Jiggy!’

The tag team is a match made in hell and this UK date is a show not to be missed. Those attending will witness a moment that will go down in hip hop history when these two giants take over The Garage stage for one night only this January.

To have a chance of winning this great prize simply answer the following question:

What was the title of Ghostface Killah’s debut solo album?

Please send your answer to comps@flavourmag.co.uk along with your name and address and be sure to write Wu-Block in the subject header. Good Luck! This competition closes on January 13th, 2013.