Fast, fun and action-packed, brand new Brit movie Shank has the energy of Crank, the grittiness of AdULTHOOD and is set to be a youth cult classic.

To win tickets to the Shank premier see below

Set in London 2015, we see a city that’s gone through a dramatic metamorphosis. Money is scarce and the disparity between the rich and poor has reached dizzy heights; young people roll in crews and hustle to survive. Shotters in 2015 aren’t dealing drugs, they’re selling food – or munchies as they call it in Shank – to make their way in the world.

Grime MC Ashley ‘Bashy’ Thomas makes his film debut playing the super-tough Rager who heads up a crew called the Paperchaserz. He features alongside Kedar Williams-Stirling who plays Junior, the star of the movie, whilst Jan Uddin (Sweet Boy), Adam Deacon (Kickz) and Michael Socha (Craze) form the rest of the gang, alongside their dog Dutty. The boys live in the slums, have no parents – and get by relying on each other as family and raiding food vans to make money and survive.

When a munchies’ heist goes wrong, a member of the crew gets shanked by Tugz (the leader of the rival crew). Junior becomes hell-bent on avenging his death, with the help of the Paperchaserz.
The movie follows the guys as they search for Tugz and go head to head with other crews along the way. But the guys aren’t alone on this treacherous journey; alongside them are three pretty teenage girls in the form of Ree Ree (Jennie Jacques), Tasha (Kaya Scodelario from Skins) and Lexy (Rheanna Murray). The girls have their own axe to grind with Tugz. Tasha was a victim of his shank previously and older sister Ree Ree and friend Lexy want to make sure she gets her revenge too. From the director’s chair
Although Shank’s director Mo Ali has been in the directing game for a while, his accolades have been in music videos. This was his first feature. At only 27 he is still very young (most film directors start hitting it with scripts in their mid 30s). ‘When I was offered the film I felt so privileged. I wondered if I was ready but looking at my body of work, I knew I was good to go!’ And go he did. Just like his namesake he stung like a big ol’ bee. Watching Shank is like literally being picked up out of your seat, getting shaken around and then being slammed right back down. Ali is good, very good.

Youth Film with a Difference
The film is gritty and raw with a strong message about making the right decisions in life. It’s also anti-knife crime. Shank is even working in coalition with the Damilola Taylor Trust. ‘We wanted to show that young people can make good decisions in life, and that violence or rolling with a bad crew aren’t the only way to prove you’re a strong person,’ says Mo.

So what was Mo’s aesthetic with this film? ‘I wanted to show kids from an urban area a different kind of film – not just something with gangsters in it.’ And ‘Magic Mo’ as Jennie Jacques likes to call him definitely hit the nail on the head. The film transports people who are used to a cosy life of iPhones, Wiis and fast food, and lands them in a London that looks more like the streets of Afghanistan, with people sleeping in cars, selling meat on the side of the road and struggling to find their next meal.

And the film sought the help of young people to make sure the movie was something they would want to see. Script workshops were held at a South London school with the pupils. Mo revealed how that impacted on casting decisions too. “We cast a lot of the kids as extras because they were so passionate about the project. One of the main characters Lexy is played by a girl from the workshops. We just loved her feisty attitude.” Angel delight
The film is peppered with Manga-like cartoon segments where you see the characters have fantasy-style fights. And the visual treats don’t stop there. The film is shot from moped camera angles and video phone-style images are also relayed to the viewer. With his music video background Mo was never going to give audiences just the standard widescreen view. ‘I had seasoned directors telling me to go for typical shots – but I took their rule book and threw it away. I wanted to do it my way!’

Class cast
Despite this being Kedar’s first feature film, the hottest new actor on the block tells us, ‘It’s just the beginning.’ The talented teen admitted that the role didn’t fall into his lap. ‘There were other boys auditioning and I knew they were good.’ But his killer ability shone through and what we get is an endearing, dramatic and strong portrayal of what it’s like to suffer the loss of someone you love and struggle to deal with the emotions.

Jennie passionately told us that getting a ‘strong project that I could sink my teeth into was a dream. I loved making this movie!’ Whilst Adam enthused about being part of a unique and surreal action film that gives young people a different and exciting cinematic experience. Bashy reminisced on first reading the script: ‘I was excited because Mo was attached and I know him (from the grime scene) and I imagined how big it was gonna look – although it was slang-heavy. Me and Adam (Deacon) made sure the excess slang was cut back!’ The film is set against a soundtrack of sick grime/urban tracks from some of the UK’s finest such as Donaeo, Mz Bratt, Roll Deep, Skepta and Newham Generals to name but a few, and not forgetting the title track When The Sky Falls by Bashy feat. Loick Essien. 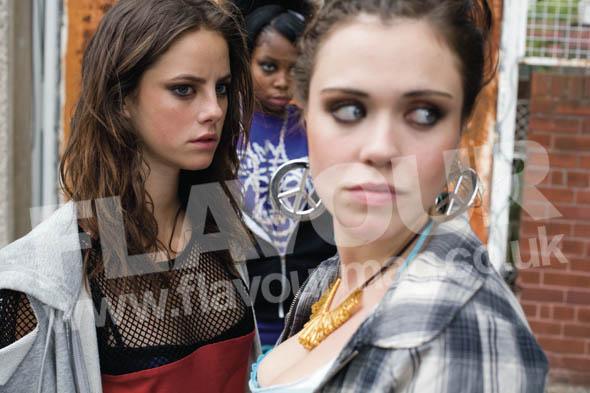 Kaya (best known as Effy in Skins) says, ‘Hearing all the tunes transported me back to when I was a bit younger. I need the soundtrack!’ She is incredibly believable as the young, angry Tasha although she protests ‘I’m much more chilled than her!’

Sweet as you like
Kaya may be nothing like her character but Jan Uddin is definitely Sweet Boy by name, Sweet Boy by nature. The one-time model (who treats the ladies to a view of his impeccable abs during the movie) admits that he loves the women. ‘I’m not a player – I love women… many of them. I’m just open and honest that I’m not looking to settle down right now!’ Sweet Boy, Kickz and Craze definitely provide some quality funny moments including Kickz’ obsessive trainer cleaning (well, the poor guy hasn’t been to a trainer store for nine years) and the relationship between Craze and his dog Dutty. ‘He loves that dog!’ Michael Socha tells me in a rather serious voice. ‘I reckon it’s ’cos he’s been the one thing that he could always rely on. Not sure if it’s healthy though!’ he states through laughter.

The boys and girls on Shank give us the low-down on life
How do you approach the opposite sex?
Michael Socha: I’m honestly really crap. I can’t pull to save my life unless I’m steaming.
Adam Deacon: I’m getting romantic in my old age. Sometimes I do the whole flowers thing
Jan Uddin: I would make a little eye contact, see if there’s a glimmer in her eyes and then pursue that.
Kaya Scodelario: With my current boyfriend I literally had a friend whisper in his ear, ‘Oi my mate fancies you…’ secondary school-style.

How do you cope with love scenes?
Michael: With a bit of brandy!
Jennie: Just remember your character fancies the pants off them even if you don’t!
Kaya: Luckily I’m underage [17] so have a body double for nude bits!

How do you stay looking so buff?
Bashy: I go to the gym when I have time but I need serious muscles for my next role!
Jan: I did a few crunches every morning to harden the abs out!
Jennie: Erm, the chocolate diet!

Shank is a cinematic experience not to be missed. With a strong story, fast-paced action and a stellar cast this Mo Ali’s debut movie is definitely destined to become a cult classic.

Shank is out on March 26th in cinemas across the UK

We have a pair of tickets to give away for the Shank premier, this is your chance to mingle with the cast and crew… To win tickets to see premier of shank simply write in the comments box below “I want a ticket”

This competition is now closed – Congratulations to the winners