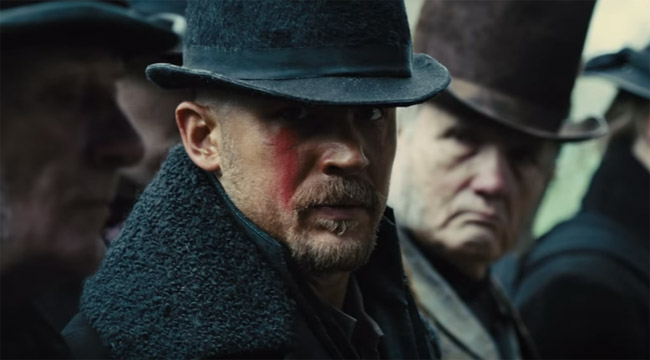 To celebrate the release of tv series Taboo on Blu-ray, DVD and Digital Download on May 29th we are giving away one boxset of the series to our readers.

From executive producers, Ridley Scott, Tom Hardy, and Steven Knight comes the year’s most talked about drama as the acclaimed new series, TABOO, arrives on Blu-ray, DVD and Digital on May 29th courtesy of STUDIOCANAL. Gritty, atmospheric, and visually stunning, TABOO is a thrilling and immersive journey into a world of 19th century political and psychological intrigue, as Academy Awardâ-nominated actor Tom Hardy leads an all-star cast on a descent into pre-Victorian London’s heart of darkness.

Set in 1814, TABOO follows James Keziah Delaney (Tom Hardy), a man who has been to the ends of the earth and returns irrevocably changed. Believed to be long dead, he returns home to London from Africa to inherit what is left of his father’s shipping empire and rebuild a life for himself. But his father’s legacy is a poisoned chalice, and with enemies lurking in every dark corner, James must navigate increasingly complex territories and assemble his very own delinquent league of the damned to avoid his own death sentence. Encircled by conspiracy, murder and betrayal, a dark family mystery unfolds in a combustible tale of love and treachery.

Unlike anything to receive a Saturday evening prime time slot on BBC1, the gripping eight-part series is a dark, moody, and subversive take on the classic period drama that paints Georgian London at its grisly best.  Based on an original story by Tom and his father, Chips Hardy, the series reunites Hardy with Academy Awardâ-nominated writer Steven Knight for their third collaboration following Locke and Peaky Blinders.

TABOO is created by Steven Knight with Tom Hardy, and Chips Hardy, who is also the show’s consulting producer. Executive producers are Ridley Scott and Kate Crowe for Scott Free London, Tom Hardy and Dean Baker for Hardy Son & Baker, and Steven Knight. The series is produced by Scott Free London and Hardy Son & Baker for BBC One and FX with Sonar Entertainment distributing worldwide outside the UK. With the second season of TABOO already confirmed, now is the time to catch up on 2017’s most addictive new series.

To be in with a chance of winning one DVD Boxset, simply email your name and address to comps@flavourmag.co.uk and make sure to add ‘Taboo DVD Boxset Competition’ to the subject line. Winners will be chosen at random on June 6th, 2017. GOOD LUCK!