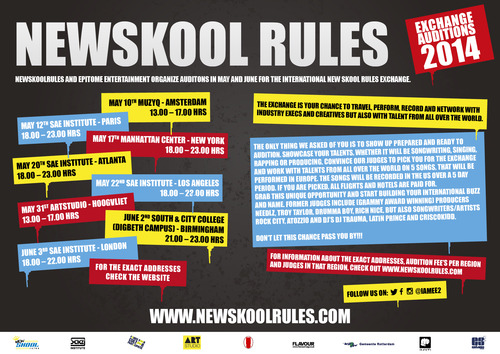 For the third consecutive year, New Skool Rules and Epitome Entertainment have teamed up for an international exchange program designed for aspiring young singers and rappers.

For the competition 3 European talented singers /rappers and 3 American singers/rappers will be chosen from several auditions. The auditions will take place in Rotterdam, Paris, Amsterdam, Atlanta, L.A.,London, Birmingham and New York. The talent that gets picked will be flown to New York, to work with grammy award winning producers and each other to create great new songs. After the recording process in New York, the talents will be performing at an European festival The UK auditions will be on June 2nd in Birmingham and June 3rd in London.

To register your interest and to find out more about the competition go to www.newskoolrules.com . In the box labelled ‘How did you hear about the exchange write Flavourmag and you could get VIP entry into the competition.