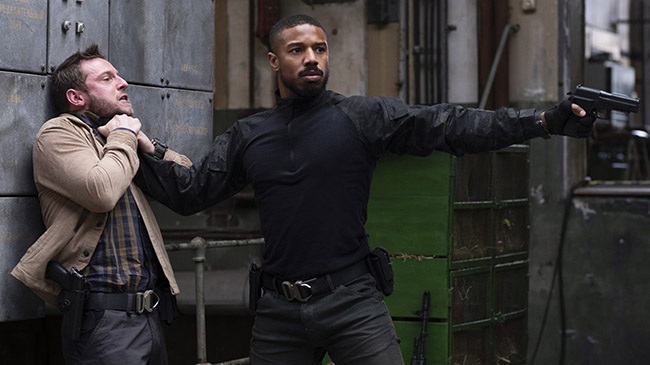 Sicario 2 director Stefano Sollima teams up with Michael B. Jordan for the latest in franchise fodder inspired by Tom Clancy’s 1993 bestseller. It’s another generic auctioneer that’s oozing a rush job, filled with high levels of testosterone and machismo, questionable authenticity and eye-rolling predictability.

Jordan takes on the role of Navy Seal John Clark, highly skilled and able to hold his breath underwater for an unnatural amount of time. When his heavily pregnant wife is murdered at the hands of the Russians after a highly successful operation undertaken in Syria where Clark and his team took out Russian Special Forces, Clark is hell-bent on revenge.

Backed by his boss and friend, Karen (Jodie Turner-Smith), aided by an arrogant and seemingly suspicious CIA Agent Ritter (Jamie Bell) and with the blessing of the US Defence Secretary Clay (Guy Pearce) the black ops mission takes on an unconventional life of its own.

Updated from the Vietnam War to the Syrian conflict makes no difference in the high octane energy poured into the explosive action set pieces, but this isn’t the films major problem. Failing to hold the grip of attention from the early stages is highly surprising since this was co-written by Taylor Sheridan (who also worked alongside Sollima on Sicario). It’s a convoluted plot watered down with the typical repetitive story that has been told time and again but without the inkling of any motivational entertainment.

Jordan, who has become a staple in Hollywood for a number of great movies could really have done better for his first foray into producing an action vehicle, a vehicle which he fails to drive authentically not being able to talk and keep his eyes on the road at the same time.

It’s an all-round fail from a writer, director and star on a number of disappointing levels, refusing to light the fuse for an explosive and thrilling offering.