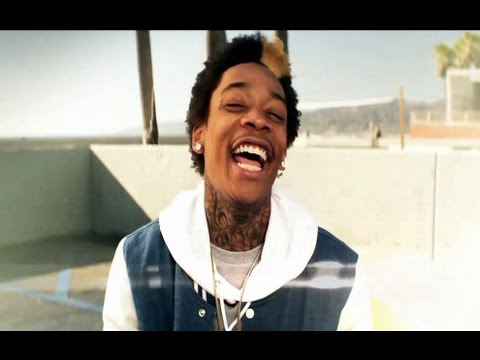 From nursery kids all the way to pensioners… they can all be heard singing the lyrics to ‘Black and Yellow’ by rapper Wiz Khalifa (Arabic for ‘successor’). Flavour makes a call to chat about his like for the UK’s Tinie Tempah, US model Amber Rose and his ‘relationship’ with Kanye…

It’s a pleasure talking to you, man. How you doing?
Yeah, for sure! I’m good, man. How are you?

We’re nice. So what have you been up to?
Just working. I’m on tour right now; I just finished up the Green Carpet tour with my homie Mac and I’m promoting the album.

Cool! Before we get into it, just have to ask you… what is this Taylor Gang all about?!
[Laughs] It’s just really all about being an individual, being comfortable with you and who you are, and expressing yourself at the same time, being yourself – that’s the best way to define the Taylor lifestyle. Being free, not trying to overstep your own boundaries.

We hear that! Congratulations on your first major label debut with Rolling Papers. How does making an album on a major differ from being independent?
You know, for me the process wasn’t too much different, because with me and the people I work with on my independent label Rostrum Records and the people at Atlantic, we really just communicate and talk, and make sure that creatively I have what I need and I’m able to do whatever I’m able to do. So it’s not really much of a difference with the labels; it’s more with me myself because I know I need to make a big record that lasts forever, that’s the main thing. I don’t have to tone it down at all, it’s actually taking it to the next level and building on what I already have and making that magnificent. You’re no stranger to London – tell us why that is?
Yeah, I was there for a small amount of time: my parents were in military so we were posted over there for a little bit, I lived there. I was really, really young, but from my memory I really like the sights [laughs].

And you’ve actually hooked up with one of our greatest, Tinie Tempah, on the UK remix to ‘Black and Yellow’ and ‘Till I’m Gone’. Are there any other plans to collab with other UK artists?
Yeah, definitely! I’m going to keep working with someone from the UK. I ended up being able to be on Tinie Tempah’s single over here so I’m definitely excited about the song, and it’s going to be a good look for both of us!

Do you think Tinie could take over the US?
Yeah, I think any artist who is doing ‘them’ and completely just projecting what they feel personally, they can get any crowd.

We hope so! In case you didn’t know, tickets to your concert in London sold out in less than 40 minutes, sir – did you know you had such a big following here?
Wow! Nah, I didn’t know. I always see the fans on Twitter and they just show love and support and buying tickets – that’s a whole other aspect of it, I love it!

Speaking of Twitter, you actually reply to your fans – how important is it to you to reply to them when they message you?
It’s really important because I always did it and I know how important it is for them when they get those responses. It really means a lot to the kids, so if I can give a little bit of that special feeling, I’ll make it happen.

Let’s get a bit personal Wiz… you’re a heavy weed smoker, we know this, but what does it actually mean to you?
Well, it’s definitely opened up an umbrella for people to fall under. It’s cool, because, you know, weed or great music or whatever clothes we wear, it just helps to bring everybody together.

Any crazy moments?
[Laughs] I don’t have one craziest moment with weed; I just really enjoy pot and the things that it brings.

Let’s speak about your peers. How’s your relationship with Snoop Dogg? And you’ve got the movie High School coming out soon, what’s the latest on that?
We start filming in a couple months actually; everything’s great with me and Snoop. It’s a dream come true to be able to work with Dogg, just how genuine he is and the support he has for my shit is what really, really motivates me and keeps me going!

Have to let you know, you’ve got both my five-year-old cousin and my 50-year-old mother saying, “Black and yellow, black and yellow” – arguably that’s your biggest hit, did you expect it to get that recognition?
[Laughs] It definitely gave me my position in the game. I’ve been doing a lot of things on the underground level for a long time and I kind of reached that on the underground level. Then people were waiting to see what I could do on the mainstream level, and when I came up with ‘Black and Yellow’, it made everything clear to everybody.

You’ve had so many achievements. 2010 was your breakout year: you made the XXL Freshmen List, MTV’s Hottest Breakthrough MC, The Source’s Rookie of the Year, you signed with Atlantic and, of course, Kush & OJ. Which moment for you personally tops the list?
Ah, man, I don’t like to pick them off as the biggest or the best – but all of those things you mentioned sounded pretty awesome when you said them together!

Speaking of the XXL Freshmen List, what are your thoughts on this year’s list – who are the ones to watch in your opinion?
I think all of them, to be honest; you got to look out for everybody, you can’t count anybody out. Of course I’ll be rooting for Mac, know what I’m saying? But like, Meek Mill, he’s official; Lil B, he’s tight, he’s a friend of mine. So there’s a lot of guys on there who are good. It’s just the way the game is now, it’s open for anybody to do the thing they want to do.

Now that we’re acquainted, let’s talk about your other half, Ms Amber Rose. How did you two become an item?
It goes kind of like everything else I do, just real organic. We didn’t meet on like business terms, she didn’t even really know who I was, but of course I knew who she was. She’s cool, we chilled, and when great people hit it off, that’s what happens!

On Twitter it seems to be a little frenzy that you and Kanye both have fake accounts, which both take shots at each other. How’s your relationship in real life?
[Laughs] I don’t have any relationship with him. I’ve never met him before; it’s not anything negative or anything positive, it’s just not there. It really doesn’t exist.

Thanks for clearing that up. We look forward to seeing you soon! Definitely, man! See you soon,
No doubt!