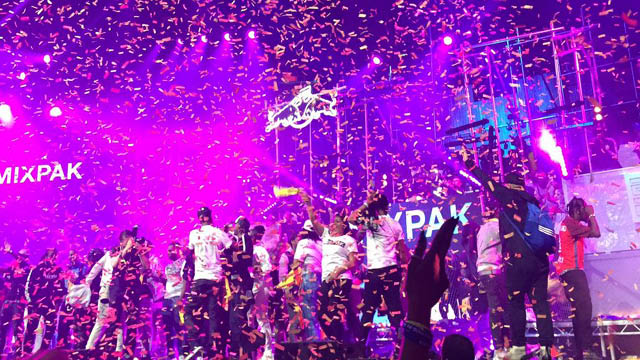 Here’s some info the rounds

Round 1: Pressure Drop – Won by UKG Allstars
10 minutes per crew. Time to check your levels, mics, watches and selection – clash is coming! DJs take the temperature of the crowd and then turn it up a notch.

Round 2: The Selector – Won by Eskimo Dance
15 minutes per crew. DJs play any style, and crews are judged purely on tune selection. Knowledge is king.

Round 3: Sleeping With The Enemy – Won by Mixpak
10 minutes per crew. Crews twist it, playing an opponent’s style of music. Big test. The mighty may fall.

Round 4: Armageddon – Won by Mixpak
2 x 5 minutes per crew. Clashing crews pull out their biggest anthems. This is the final round, so double points and double daring!

UKG Allstars became the victors of round one, their first dubplate was a video drop by Danny Dyer from the Eastenders pub. As soon as this came on screen, the crowd went wild and we knew they had the first round in the bag.

Big up @UKGAllStars – Round 1 Winners.

Round 2, the selector round, again saw each sound system drop tune after tune. Eskimo Dance came out on top for this round unleashing the like of Chip, Lethal Bizzle, Ghetts, Fekky, Wiley and more. Wiz Khalifa and Taylor also dropped a video with some fighting talk from Amber Rose but this wasn’t enough to win the round.

The Round where each sound had to play each others music. This was probably the hardest part of the clash. Each sound unleashed wave after wave of attack, playing each others music. Wiz Khalifa and Taylor gang unleashed a Krept & Konan dubplate to start the proceedings, along came Stylo G and Ice Kid too.

However the winners of round 3 went to Mikpak, who had Popcaan, Tony Matterhorn, Tim Westwood and others. The big moment for round 3 was when Big Narstie come on stage after his video drop. He pulled of his T-shirt, exposing he big fat belly and smashed it on stage with his lyrical talent.

The armageddon round is where it all went down. UKG Allstars dropped a Justin Bieber dubplate, YES A JUSTIN BIEBER dubplate along with a Craig David dubplate and we thought it was all over. However Eskimo Dance followed this up with an Ed Sheeran and Adele dubplate and we couldn’t believe our ears, we knew that all the sounds wanted to win, and all the sounds were taking it seriously. Up came Wiz with the ‘Hold Up’ We Dem Boyz dubplate, but the winners Mixpak literally obliterated everyone with a Drake Dubplate. Drake, Drake, Drake, it was all over at that point.

The winning dubplate, this is the moment @Mixpak @PopcaanMusic played @Drake and DONE THE PLACE @RedBullUK pic.twitter.com/npObdCk7XO

And after all the hype, Mixpak played their final winning tune, PALANCE the soca smash hit that got the crowd wild.

Well done to all the sound system, you all fought hard for the title and we appreciate your effect in making this one of the best events of 2016.