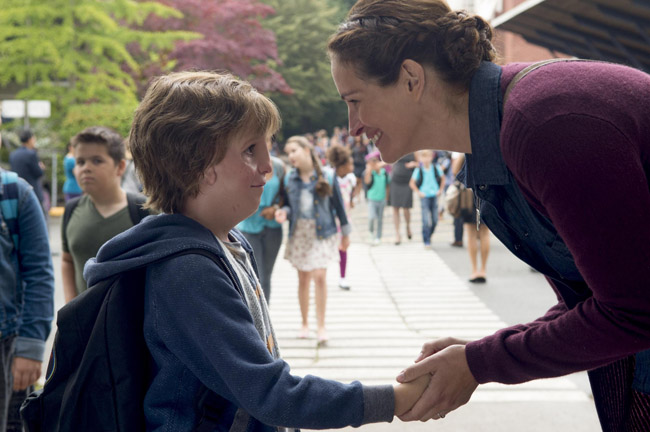 There seems to be a theme running through child targeting movies over the past few weeks, first came Paddington’s return in the highly successful sequel and now Wonder, in which sugary takes a diabetic turn, but both with the underlying message of acceptance and kindness to everyone is the key to a harmonious world.

10-year-old August Pullman (Jacob Tremblay) has had his facial disfigurement since birth, years of plastic surgery, in an attempt to correct the ailment, hasn’t quite made the impact intended, but after being home schooled to a certain point by his Mother, Isabel (Julia Roberts), his parents (Roberts and Owen Wilson), agree it’s time for Auggie to attend School, to be amongst children of his own age, but it comes at a cost of heading, face on, the stares and the inevitable bullying once his beloved astronauts helmet has to stay safely at home.

Meanwhile, Auggie’s older sister, Via (Izabela Vidovic) is experiencing her own teen issues. Her best friend has deserted her after a summer away at camp; the only other person she felt closest to was her recently deceased grandmother. Lonely, she glides her way through High School trying out new ventures and a boyfriend. Whilst Via has always taken a backseat to their parent’s attention as they devout their lives to making Auggie’s happy, she comes across as a well-rounded young woman. Having very mild anger issues towards the situation, but in no way has she rebelled, leaving her character wholly underdeveloped and missing a pragmatic edge.

Back in Auggie’s world, before term starts a small group of his peers are ordered to show him around, including the kindly and accepting Jack (Noah Jupe), who has a striking resemblance to a young Anton Yelchin, and the arrogant brattish Julian (Bryce Gheisar) who makes it his sole aim to carry out a bullying campaign against Auggie for the year the film covers. Over the year, Auggie’s friendship is tested and Auggie shows his resilience against both those issues and the bullying but behind closed doors struggles with his emotions. The plot takes the form of paint by numbers sketch, its formulaic in its soft and safe approach which could have been given that extra edge if the filmmakers had taken the time to watch 1985’s The Mask which tells a similar story which a much harder impact.

The overall cast performances are adequate in their deliverance, but routine and lacking the passion a storyline of this nature screams out for, but the actors can’t be to blame for the washy script they have to transform into a viable movie. Wilson’s Nate bobs positively on the rim, propping up Tremblay’s Auggie in his darkest moments, and Roberts channels Sally Field’s turn of Mrs Gump in Forrest Gump.

Dipped in a coat of honey, director, Stephen Chbosky’s adaptation manipulates the tear ducts and the heartstrings with a choking effect with a lack of investment into its supporting characters diluting the inoffensive script of any edgy nuance.

Wonder is out in cinema’s December 1st.