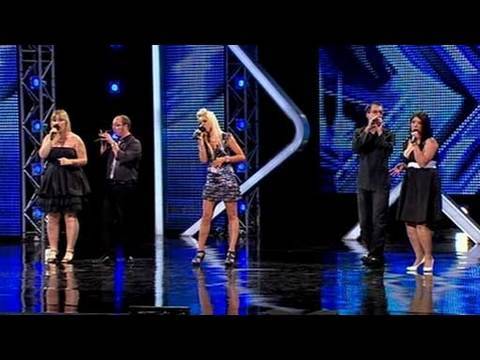 It was down to the serious business at last this weekend, as we reached the ‘boot camp’ stage of the competition, where 200 would-be winners were whittled down, first to 50 and then finally to a lucky 24, who will go on to judges’ homes, from where the final 12 will emerge. We were treated to the usual medley of the tearful, the triumphant and the terrible, the show opening with the “excited” contestants on stage before the judges at London’s Hammersmith Apollo, apparently clueless about what was to follow. Simon welcomed the competitors to boot camp, declaring them the “most talented group of people we’ve ever had on this show”, before Danni dropped the bombshell that for the first challenge they would have to team up in groups of 3 (that’s three acts to a group, not three people) to perform. Thankfully there was very little American Idol style high-drama – bitchiness, catfights and shouting matches were kept to a minimum as most of the teams did their thing without too much fuss.

Unsurprisingly, Saturday night’s early performances were awful. I’m going to take a different approach this week, and rather than go through the weekend’s shows in their entirety I’m just going to run through a few videos of the highlights before breaking down the groups and judges that will be overseeing them going into the next stage. First up a highly cringeworthy trainwreck of a performance from It Takez 2 and Just Du-Et alongside sneaky Alishia who confessed to partnering with the two pairs of apparently tone deaf misfits in an effort to make herself look better. Smart move.

The highlight (and most significant event) of the weekend as far as I’m concerned was the formation of a new girl-group made up of three female soloists, offered the chance to re-enter the competition together after being rejected as soloists but having impressed the judges with their group performance. Good call on the part of the judges – the girls were unremarkable as solo artists but gelled well as a group, and were certainly strong enough to carry that categories, especially as they get to know each other better and begin to pick up a bit of chemistry (assuming they make it to the live shows).

The other major talking-point of the weekend was the progression of the remarkably irritating John and Edward. I’ll refrain from commenting further on this one – I’m sure you can make your own minds up here, and there’s not much I can say about them that doesn’t run the risk of landing me with a libel suit.

They ran through a few memorable auditionees who’d progressed to boot camp – the first performance shown on this video, Nicole Jackson’s take on Oasis’ Stop Crying Your Heart Out really worked for me.

Quick mention for Lucie Jones from Wales, who wowed with her Whitney in the auditions. She killed it once again performing Christina Aguilera’s Hurt. Just for future reference, I also fancy her a little bit (might be that accent, or the voice, or maybe some combination of the two), so don’t be surprised if my commentary on her performances becomes increasingly favourable as the weeks go by.

Rachel Adedeji surprised everyone, the judges including, by choosing Paulo Nutini to sing – strange choice but it worked.

Finally, Jamie Archer whose electrifying audition impressed judges and the audience alike. This time around he performed With Or Without You – great song choice and after a slow start he eventually nailed it.

By the end of the second day, when 200 contestants had been reduced to just 24, the lineup of contestants going forward to judges houses looked like this:

Great look for Simon and Cheryl – the Over 25s is a strong group and Cheryl has an embarrassment of riches with the Boys. The girls are a talented bunch too, I’m just highly cynical about Dannii’s abilities as a mentor. With that said, at least four out of those six girls could win it. And as for Louis and the groups… well there goes that libel business again. I did like Harmony Hood and Miss Frank though. The latter particularly – if they get the opportunity to gel a little bit more, they can’t win it but they could definitely go far.

That’s all for now. This weekend we find out who forms this year’s Top 12 and makes it through to the live shows! I’ve got faith that I didn’t have a year ago (Leona could’ve been a fluke) in the UK’s willingness to back a talented “urban” artist, so I think this could be a very interesting season. Back next week.