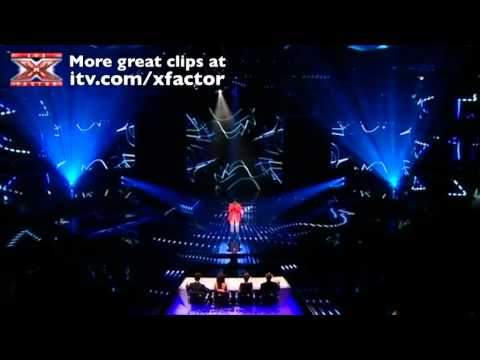 As the British nation tune into another round of exciting performances, many have already established their favourite acts, and moreso, the judges are rumoured to be moulding the singer they want to win – how subjective! Tonight the X Factor stars have the opportunity unleash their creative and expressive talents with their song choices supported by their mentors. The theme this week is guilty pleasures – hit songs that the acts secretly love.

Paije Richardson.
Dannii finally took my advice and had Paije ditch the dancing on stage and stand still for a change, and goodness me did that work, we’ll see, they don’t have Mary Byrne hopping around the stage do they! That was a brilliant song choice for the young cuddly Luther Vandross as Louis called him last week, it was without question Paije’s best performance so far. He’s so sweet. I recall Dannii commenting on Paije’s performance saying – Paije, you have arrived, whatever, he arrived three weeks ago you just gave him the wrong song twice in a row!

John Adeleye.
I absolutely love this song Zoom by Big Fat Larry’s Band. If I remember correctly it was on an advert back in the day possibly late 80’s early 90’s it’s such a gorgeous song. I listened to it on YouTube, to refresh my memory of it – such good memories from growing up in the 80’s. Love that era so passionately, music for me then was the best. I really dunno about John’s hair. For me it was good, but some of the vocals were a little shaky, almost as if he’s holding back a little and wanted to really belt it out with the runs in the song and the riffs. He’s lovely.

Rebecca Ferguson.
Love Rebecca, her voice is so mature and stylish. Her album would be so amazing! Sultry, and sassy all the way, and she took the song and gave it a perfectly measured dose of sensuality and elegance that it needed and certainly deserved. It was a star quality performance according to the majority of the judges. Well done Rebecca!

Cher Lloyd.
My favourite girl in the competition did me proud tonight. The mix of two classic hit records, Blackstreet No Diggity, and Shout. What a complement when Simon told her it didn’t feel like a competition song, but a song from an established signed artist who had returned to perform their hit record. Wow. Cher just rocks and always adds that element of surprise.

Matt Cardle.
Matt undoubtedly gave the best performance last week, this week he’s at it again! It was so good to hear a Britney Spears song on a male vocal. He stamped Matt all over this track, and Cheryl couldn’t have to put it better, it sounded like an artists unplugged session.

One Direction.
The boys are brilliant, young, talented, and extremely stylish, they will get absolutely mobbed by young teenage girls – they have all the ingredients for a successful new boy band. Liam on the lead vocal always kicks off really well, and I’ve also found my favourite member – Zain, totally love his vocals.

Treyc Cohen.
Normally she bores me, but tonight she did really well, despite being ill during the week, she soldiered on. Her stage arrangement was breath-taking.

Mary Byrne.
Tonight Mary gave such an excellent expression for such a powerful song from the Irish songstress. The judges deliberated on whether Mary should choose a more current song to appeal to all ages. Let’s wait and see what the public think.

Aiden Grimshaw.
Diamonds Are Forever, Aiden looked like a theatrical undertaker in a top west end musical. Reminded me of the movie Sweeney Todd and previous X Factor contender Rhydian two years ago. Not in a negative way, but he adapts so well to the character he takes on for each song he sings. He’s very intense. Simon’s is right in saying you can take an older classic song and make it relevant, and timeless – I so agree.

Belle Amie.
The poor girls, had a really hard time last week, and equally a tough set of feedback comments from the judges tonight. Louis raised the fact that he feels Simon focuses more on the boys One Direction, to the point where Belle Amie actually have no mentor! Seriously Louis? Or are you just hating?

Wagner Carrilho.
Was thinking it would be so funny if one of the judges just said, ‘Right enough is enough Wagner, and you’re going home!’ Instead of giving him sarcastic, patronising reactions and comments to his performances! Have you seen the love and fan base of groupie love he has across the country?! Go on Wagner – get it!

I had to literally laugh out loud at Simon’s comment saying that Jungle Book is one of his favourite films of all time. Jungle Book?! Ha-ha! He’s right though it’s an absolute classic. Katie’s song choice King of the Swingers displayed such versatility in her ability, and breathy distinctive Marilyn slash Gwen Stefani style voice.

The results are here.

My prediction for the single elimination this week is:

Wagner Carrilho even though I think he’s wicked! Lol the public may have had enough of his colourful  sexy Latin  fruit  filled stage antics who knows! Hopefully it’s not time for a good singer to leave, as sometimes revealed results can be an unexpected swift exit for one the acts.

My prediction was wrong yet again, Wagner is still in the running! He’s got that groupie love on lock! Paije was too near the bottom two for my liking, Phew! That had my heart racing, I really like Paije. For me it wasn’t a surprise to see TreyC in the bottom two, the public must agree with me, when I say, she’s a really good singer but she’s boring. Did you see Simon’s reaction when girl group Belle Amie made it through? Ha-ha! Sheer relief as he’s already lost two acts, and this time it’s on Louis, he was persistently teasing Simon, enough bantering between the two male judges – the women Dannii and Cheryl still have all their acts present.

So John Adeleye becomes the fifth act to leave, as the competition really begins to heat up, just 11 acts left and Christmas is less than 3 months away, before we know it the winner of the X Factor 2010 will be revealed.