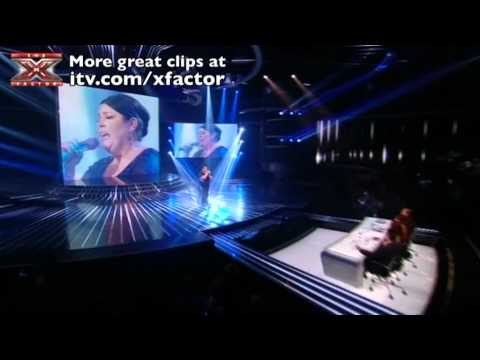 Another week, another song, another acts dream will dramatically end as the remaining 7 become 5 in a double elimination just 4 weeks before the festive season. This weeks theme is Rock night, and the acts get the chance to perform 2 legendary Rock songs to strengthen their chances, as we get closer and closer to discovering the winner of X Factor 2010. Exciting news emerged this week as Simon announced that X Factor will be launched in America next year replacing American Idol. I’m 100% sure the talent across the pond will be miles better, putting the UK to shame! Stay tuned – it begins in 2011.

Mary Byrne.
Mary is well and truly back to stay, her performance of All I Want Is You was breath taking, and will definitely, well, should keep her safe and sailing into next week, having said that no one’s safe. Her second song was Brass In Pocket, she brought a little bold sassiness to the stage with her clever choreography.

All I Want Is You:


Katie Waissel.
Tonight Katie sang Sex Is On Fire. Prancing around the stage stomping her foot, and shouting her well known Woo Hoos it didn’t really do it for me. I love Jamie Afro’s version of the song in last year’s competition, and it just seemed too big for her. Dannii said it all, she felt Katie tried too hard – she did. On listening to her performance snippet amongst the other contestants at the end of the show, I had a feeling she will leave tomorrow.

With Katie’s second song nevertheless, I have to say that this is my favourite song and performance of hers – Everybody Hurts by REM. I adore the original. Simon had an issue with doing such a big song, within half the time, he’s right. The beauty of such a song is not captured if it’s cut to just one verse and a chorus or bridge.


Matt Cardle.
Matt – the favourite act to win, sings I Love Rock N Roll, it was a good performance but not his best to be fair, and some may disagree, as the song choice did however display Matt’s ability to be versatile.

His second song choice showed just that, with a solo guitar playing performance, versus simply incredible vocals. Wow. Watching with my boyfriend on Saturday evening we looked at each other in amazement, Matt’s performance of Knights in White was simply outstanding, he’s bound to win. Watch closely, as the final acts almost always, rarely appear in the bottom two.


Cher Lloyd.
A Tweeter on my Twitter account, shortly after the X Factor started and Good ol’ Wagner performed, said ‘Waiting for the real competition – Cher Lloyd!’ Ha-ha! Yes. The song Girlfriend was made for her tonight, she really blew the judges away, she made the song current and relevant in today’s charts – it was an awesome fun and entertaining performance.

Cher is back, fighting, after appearing in the bottom two last week, alongside Paije Richardson. I adore her. Her rendition of Walk This Way was just – stunning.


Wagner Carrilho.
This week, Wagner’s mentor Louis – strips his popular Brazil act of all the dancers, mix of two song and razzmatazz tonight, to just stand solo and sing Creep by Radiohead. He received some of his best compliments from the judges.

Then the next day, it seemed I spoke too soon, Wagner missed his dancers – they are back with his song choice number 2 Addicted to Love. Wagner!!! You might go home tonight mate, you should have followed through with the solo singing and no dancers a while longer.


One Direction.
Simons lads brought such exhilaration to the show it was just incredible, I’ve used that word a lot this week, everyone seems to have really stepped up their game. The fight is on. I just know the One Direction boys are going to be really close, if not in – the final. Their version of Summer of ‘69 I could see an amazing video of in the charts today, similar to the production the dancers created on stage. Omg what about a duet with Justin Bieber? Hot!

Second song was Your Are So Beautiful, another gorgeous song, Zain is hot! He should take the lead now and then, his voice is my favourite. The song was so perfect for a young boy band, the young female fans would be swooning! Whether they win or not, they’ve made it – Simon will definitely manage them into having a successful career, they’re life has already changed, I give them most respect for bonding as a group who were formed, they work, sing, and act as though they’ve known each other for years – we love that.


You Are So Beautiful:

Her album would be so amazing and I would definite buy it. She is another contestant who I believe will have a good career, and its inspiring to know that her children will be so proud of her achievements. The judges are right, her voice is so distinctive and unique.

I Can’t Get No Satisfaction was another good choice for Rebecca’s second song, and I absolutely adored her styling. The song was fab, she looked gorgeous. I love the fact that she has the ability to take a song and make it her own. She has grown the most for me.

Tonight’s show was amazing, featuring an incredible performance of new single Lose My Mind from heart throb superstar Justin Bieber, and Pussycat Doll Nichole Scherzinger who sung Poison her new single also and first solo appearance. Well, let me get straight to the point, after nail biting result announcements Katie and Wagner leave the competition tonight. My instincts were right.

After an anxious 24 hour waiting game, the seven finalists became five. Katie received the fewest votes from the public and was automatically eliminated. The survival sings off took place between Mary and Wagner, who sadly left the competition after Mary won the judges votes. His time was finally up – many thought.

Wagner sang Unforgettable by Irving King, and I thought it was one of his best performances – ever. Mary however annihilated him with her version of The Is My Life by Shirley Bassey. Louis strangely voted his own act – Wagner off, and even more strangely they started the judges votes – with Louis first?! Baffled. It was a no brainer, we all knew who the judges wanted to vote off from day one! Booooo!

Louis, ‘Dermot, I’ve had an amazing time working with both of these people. I’ve got to know you better and better. Wagner you are unforgettable. But Mary, this is your life. In the sing off, Mary won hands down. So the act I’m sending home tonight is Wagner.’

Dannii, ‘I want to keep the person in that has heart, soul and a fantastic voice, so the act I’m sending home is Wagner.’

Cheryl, ‘Mary did another incredible vocal as always. Wagner, I know you and I haven’t always seen eye to eye, but you’ve been very gracious and apologised and I accept that. You are definitely an unforgettable contestant, but tonight I’m sending home Wagner.’

Simon added, ‘I get what Cheryl said, I got to know Wagner over the last few weeks. He’s been a great sport. Why I am happy is because there were people out there trying to derail this show for different reasons. What has happened tonight is that we’ve put this show back in the hands of the public. No disrespect Wagner, Mary sang you off tonight.’

Katie Waissel became the tenth act to leave the show, and Wagner the eleventh. On the results show next week, we can expect to enjoy performances from Alexandra Burke, The Black Eyed Peas and the Glee cast – with that all important question in our minds – who is next to leave the show?