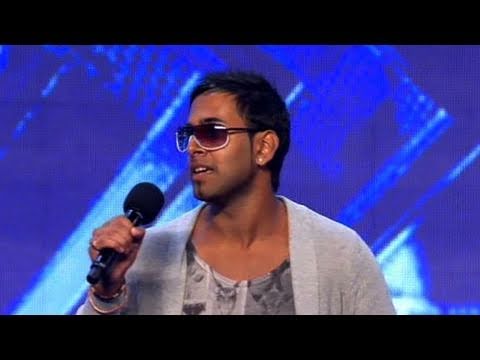 Already four weeks into the UK’s much-loved singing competition, and the X Factor welcome Pixie Lott to the judging panel for the Welsh auditions in Cardiff – a City which celebrates singing stars such as, Charlotte Church, Shirley Bassey, Duffy and good ol ‘What’s New Pussycat’ suave vocalist Tom Jones. They also return to London for another batch of auditions in the countries capital.

With no pun intended flashing the cash – literally, is 21-year-old Kash Dholliwar who opens the show singing Neyo’s song ‘Closer’, which I love. The BMW owner who works for a Mobile Phone retailer gave a terrible version of the song with his friends painfully cringing backstage – Ouch. He unsurprisingly gains four no’s in particular Simon Cowell who looked very displeased. Cheryl commented ‘I wasn’t really feeling it to be honest with you.’ Better luck next time Kash – Nice shades and side burns though mate!

Proud Welsh lad Tom Richards from Pontypridd South Wales split the judge’s decisions to a 2 yes 2 no tie with his performance of ‘The Scripts Man Who Can’t Be Moved.’ He sings the song well, a song which illustrates deep emotion yet moves around the stage like a boy band member! Louis tells Tom ‘I liked the voice but I don’t know what all the silly stage antics were! Running here and running there!  But, I loved your voice.’

Bless him – he had the biggest group of supporters backstage and it was clear that his parents had invested a lot of time, money and effort into his chosen career, you could see that he is really determined to make it as a Popstar. Pixie is swayed into changing her no to a yes after struggling to decide where she would fit Tom in the music industry genres today. Peer pressure from the audience’s chants and jeers help Pixie put Tom through to the next round.

Back in London and with the next act up, I have very little to say other than I was and still am very disappointed and ashamed. Wow. Bun & Cheese group Pinky Patty and Peas, love Bun ‘N’ Cheese so much they decide to call their group that! Seriously?! What’s next ladies Chicken & Rice? Rice & Peas? How about Ackee & Saltfish! Come on girls! They absolutely obliterated Beyonce’s moving track ‘Listen’ after beginning the song with muttering to one another trying to arrange the vocal lead or arrangement, then they spend the rest of their time on stage mumbling through the lyrics, humming and looking around!  All that said and done with such attitude and the self believed conviction that they actually good?! – Uhm., Next!

Macdonald’s employee Raquel leaves a memorable vocal in the judge’s minds, with her Alicia Key’s ‘Superwoman’ audition. She ditches Big Macs, Milkshakes and Mc Flurrys for her shot at a chance as the next winner of the show, and sails smoothly into Boot Camp. Get it girl! Louis states, ‘I think you’ve got a great, great voice.  I didn’t expect it to be that strong and powerful.’

Adorable young  high top hair styled  Paijie Richardson made my night! He may very well be my favourite, infact he takes first place over last week’s Cher Lloyd. I now have my favourite female and male vocalist. Cheryl and Simon let me down tonight, by saying no to Paijie’s Frank Sinatra’s vocal on ‘Fly me to the Moon.’ which displayed a good vocal.

With one yes from Louis, the audience start chanting again for the no’s to be changed. No words are spoken from the disagreeable judges and Paijie leaves the stage. Luckily Louis gets up and goes backstage to talk to Paijie to invite him back later that day with another song. Well done Walshy! He returns singing James Brown’s ‘This is a Man’s World,’ and blows everyone away. Talk about eat your words Simon, as he tries to style his speech to refrain from looking stupid for not saying yes in the first instance.