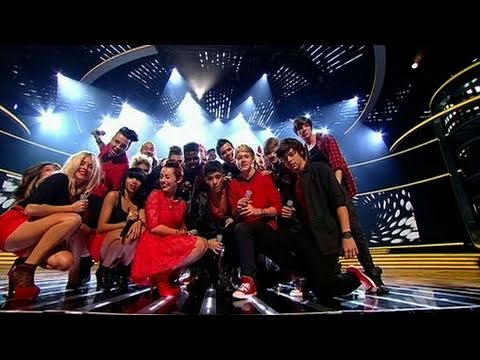 Last week results were certainly a shock to many, let’s see what happened this weekend, as the live shows are well and truly underway. There are rumours circulating that the X Factor judges already know who they want to mould over the coming weeks to eventually win. This doesn’t surprise me as it seems as though some acts have been given the wrong song twice already at this stage. I must admit this year, I haven’t seen that worldwide potential singer ability since Leona Lewis won the competition back in 2006, and I’m still tripping over Gamu not being in the competition, having watched her first audition, Boot Camp, and Judges Houses performances on YouTube. It’s such a shame. X Factor if you want talent? Review your choices, the calibre of talent has certainly become weaker over the years.

Storm Lee.
His performance was similar to last week’s, I think it’s time for him to display some versatility. Can we see Storm Lee singing an emotionally moving ballad with red hair? Hmmmm don’t know if he would be taken seriously! However he’s definitely got a pleasant set of pipes nevertheless.

Treyc Cohen.
Bored bored bored. She’s a really good singer but why does she bore me? Give Leona Lewis Purple Rain by Prince, and your guaranteed to feel goose bumps. Treyc has this note that she holds and it sounds the same in every song, I couldn’t listen to an album’s worth, having said that she is very good, but not unique enough to win.

Paije Richardson.
Poor Paije had a few problems with his breathing techniques this week, and holding notes – his vocal coach advised him to build up his stamina and do some exercise. Ok well, they basically need to stop making Paije move around so much! Ha-ha! He’s a brilliant singer just let him stand there and sing darn it!

One Direction.
16 year old teenage girls will go crazy for these lads. I adored their performance. For me they just work! Image, Popstar ability, style – all on lock tonight, well done guys I was really impressed with Zain in particular, the boys are taking one direction straight into week three of the live shows – no pun intended!

Cher Lloyd.
She’s bad! She’s definitely unique and fly, her performance was hot. If it wasn’t for Cher I would have fallen asleep; my goodness that was fun. She did her own version of Jay Z’s ‘It’s a Hard Knock Life.’ I reckon a lot of people want her to try singing more minus the rapping to really hear her vocal capabilities, let’s see what she comes up with next week. Love you Cher.

Diva Fever.
Aww bless I love Diva Fever, how could you not? Their performance made me really wish it was summer time again. But for winning the competition? Uhm…

Rebecca Ferguson.
Miss Diva Voice reminded me so much of Sadé with tonight’s performance and appearance. Absolutely amazing. Her voice is so unique it’s refreshing, I agree with Cheryl; I would buy Rebecca’s album too.

Aiden Grimshaw.
What was Louis going on about? He said everyone would know this song? What was it? Aiden did well, he loves music, and I totally agree with Simon, last week was amazing, but this week was somewhat lacking.

Wagner Carrilho.
The word love just had to be in there! So adorable. Danni was really rude to Wagner, saying ‘Did you sing all of that in English, cos I didn’t understand it?!’ He responded that he has an accent which everyone knows, couldn’t that be perceived as discrimination? How cheeky, I know the judges have to be honest but that was so offensive, she should have just thought that and not said it out loud. She put a whole damper on the mood. Boooo Dannii.

John was definitely given a better song than last week, wrapping it up in a nutshell his performance was good, and very emotional.

Katie Waissel.
I want to like her more, why don’t I? I still want Gamuuuuuu! But I cannot deny this performance was very good. She does really want this – I’m starting to see and understand that a lot more now. Having watched her musical footage on YouTube Channel it seems that she still hasn’t been given that break she needs with her career yet.

Belle Amie.
I love the song ‘Got Me Going’, they did so much better than last week. Couldn’t help but laugh at Simon beaming at his group at the end! Their performance showed Belle Amie for the first time as a fully formed united girl group. Go girls.

Mary Byrne.
Mary’s wicked! She nailed her performance as she did last week. She’s certainly a fighter. Bless her she was shaking, but definitely didn’t let nerves show in her performance. Awww.

Matt Cardle.
Best performance by far tonight, if that was the final deciding song – he would win. Rumours have it that he is actually going to win as it goes. Bruno Mars I interviewed earlier this year, he’s lovely, and I’m sure he would be very proud to hear Matt’s incredible performance of the song ‘Just The Way You Are’ – it was simply breath-taking.

The results are here. My predictions for the double elimination are:

Lowest votes – Storm Lee, John Adeleye or Paije Richardson, I really like Paije but he is still yet to be given the right song to showcase his voice.

So I was mainly right, Storm Lee is the third act to leave the competition following FYD and Nicolo Festa, and Diva Fever are the second of Simon’s groups to also depart and the fourth act to be voted off. Wagner’s still in the running! Ahh what the hell, Wagner to win! Ha-ha!