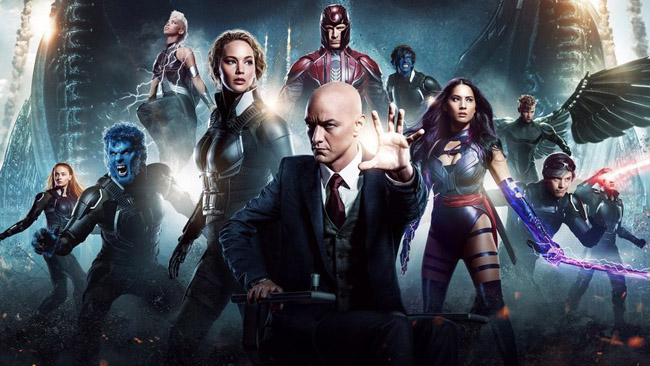 With Bryan Singer back at the helm of X-Men: Apocalypse huge expectations were in place for the next chapter of one of the most stable of comic book franchises. But in it’s 2 and a half hour running time what we get is way too many characters to keep up with and a massive void of satisfaction.

X-Men: Apocalypse starts off with explosive promise, we are transported back to ancient times with the birth of the world’s very first mutant – Apocalypse (Oscar Isaac) – amongst the crumbling pyramid of his people’s betrayal he is buried for thousands of years. This introduction has a very familiar setting and you could be forgiven if you wonder if you’re watching yet another The Mummy film. It’s the emergence of Apocalypse from his slumber which sees’s Professor X’s gifted young mutants come together in order to save the world from total destruction when Apocalypse see’s mankind has lost its way and needs cleansing.

Settling quite nicely in the early 80’s and the introduction of a few new characters as well as the old. Professor X (James McAvoy) and his trusted friend Hank aka Beast (Nicholas Hoult) is running a school for gifted children. Magneto (Fassbender) has taken to Poland to live a quiet life until his real identity is unearthed causing him to go on an angry rampage. We also see Mystique (Jennifer Lawrence) out on her own, looked up to as an inspiration by the younger mutants. The only problem is she seems to have lost her edge and reverted to her Katniss character to save her fellow mutants. Our new mutants consist of Storm (Alexandra Shipp), Angel (Ben Hardy) who hardly has any lines and Psylocke (Olivia Munn), along with Magneto being taken under the wing of Apocalypse, while Nightcrawler (Kodi Smit-McPhee), Cyclops (Tye Sheridan) and Jean Grey (Sophie Turner) are prepped for battle by Professor X and his trusted stalwarts. All with their own unique gifts but the standouts are Nightcrawler with his faster than lightening movements and a return from Evan Peter’s Quicksilver, who gets his own scene stealing piece of CGI glory. All set to Eurythmic’s Sweet Dreams.

Isaac’s Apocalypse is lacking, so much more could have been done with this super villain, but his dialogue is sparse and lacking in real evil. It almost feels like he is has been restrained and holds back from really letting loose. It’s clear the future of the franchise is being laid firmly at the feet of the younger gifted mutants as the story revolves around the newbies with our more established characters taken somewhat of a backseat. Real X-Men fans will delight in a brief cameo appearance of the much loved Wolverine (Hugh Jackman) but it’s a fleeting appearance as he disappears into the snow barefooted. Also written into the script is a little dig at the third film in any sequel always being the worst (a reference to the third X-Men film which was directed by Singer).

Whilst the battle sequence is CGI heaven, it’s extravagant and over the top with not much else going on, it’s void of any real action but then maybe we have been spoiled of late with the likes of Superhero battle off’s with Captain America and Batman Vs Superman, Anti-climatic at its best.

X-Men: Apocalypse is in cinemas May 18.