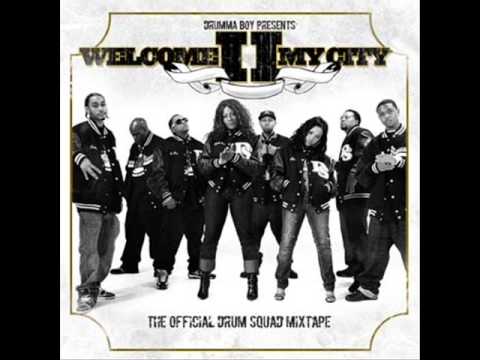 Named Drumma Boy due to his distinctive drumming patterns and production arrangements, Christopher Gholson has been touted as one of the hottest producers to emerge in recent years. Describing his style of production as “Gumbo” music because of his ability to use whatever he can find and turn it into a hit record, Drumma Boy is known to combine classical chords with urban street sounds making his beats the most sought after in the South. With roots which couldn’t be farther from the Gritty world of Hip Hop, Drumma Boy was raised in a musically trained family and held the first African American chair position in the Memphis symphony choir. Having worked with a host of hip hop acts that include Kanye West, Lil’ Wayne, Nelly, T-Pain, Drake, Gucci Mane and Ludacris and most notably with T.I. on his Paper trail album which was Grammy nominated in the Best Album category. Drumma Boy was recently hailed as Best Producer of the Year for two consecutive years at the Southern Entertainment Awards. At just 26 Drumma Boy has reached unprecedented levels of success and it seems that this is just the beginning…

You come from an orchestral background with your mum being an opera singer and your dad a professional clarinet player. Has this influenced your musical output?
Definitely! Orchestra is the most complex music on Earth. I was playing composer’s music before I even knew anything about Hip Hop. I play piano and the clarinet. My Dad taught me to play the Clarinet for 18 years straight. I could’ve been in the orchestra but I found it more fun for me to write my own music which is what I’m doing with producing, composing and arranging. I love Beethoven, Bach and Mozart but I found it boring to persistently play someone else’s music. The plan was to conquer the world writing my own music and writing music for other people.

Who are your musical inspirations?
Quincy Jones, Dr. Dre and Mozart. One legend from different time periods. I don’t believe in having multiple inspirations from the same time period.

You attended University as a Music Business major – do you think it’s important to be equally schooled in the business side of the music industry as well as the creative side?
It’s extremely important. I learnt a lot of key things to the business like the importance of management and the importance of accounting like paying your taxes. Just little things to make sure that you’re longevity is secure. You want to make sure you are safe 20 years down the line. This industry is 90 per cent business. I mean there are Grammy award winning producers that don’t even have a publicist. How is the world supposed to know you and recognise you without a publicist? I mean that’s just one example but the business side is extremely important for me and is why I’ve made it so far at such a young age.

You founded your own production company “Drum Squad Records” which houses producers and songwriters. How difficult was it starting up your own business?
It was very difficult starting up my own business. Each year I have gotten more placements than the year before, each year we’ve worked with bigger artists and gotten more publicity than the year before, and each year we are picking up more and more awards. I founded Drum Squad in 2003 and 7 years later in 2010 we are one of the most sought after production companies in the United States.

You were recently given the key to the city of Memphis. How did that feel to be recognised so highly by your home town?
Well, like I said it’s been 7 years in front of your eyes that I’ve been making music but in reality I’ve been grinding in my city and beating down every door I could in the city of Memphis since I was 13. So to finally get credit and be recognised for it is amazing. Coming out of the city of Memphis there is a lot of love but there is also a lot of hate. A lot of people don’t want to see other people come up and they don’t want to see other people shine which is why I try to give back so much and try to change that negativity around. I want to bring back opportunity and enable better opportunities than before. There is so much that I’m doing in my city and there is so much belief and faith I have in my city and that’s why the key means so much because everywhere I go I am representing my city. I am that role model, that leader, that representation of our great city. How do you deal with the negativity you attract from being so young and successful?
Even when I receive hate I still try to give back love 100 per cent. I just try to teach, to stimulate, to motivate and encourage. Any hate that I get is motivation for my positivity.

What advice would you give to young and ambitious creative talent such as yourself?
It’s all about BRANDING. If you are young and ambitious you need a way for people to remember you – it may be the way you dress, a certain tattoo, a statement piece of jewellery that you are never seen without like a big ass chain round your neck. You may not know my face but you know my name. Brand yourself in some way or fashion because in this industry you have to be seen. The biggest producers in the game right now are the ones that are seen and heard. Puffy is visual – he has a marketing strategy that is out of this world, Look at Dre, Timbaland and Neptunes. Be ready for the camera baby – You have got to be seen!

You can download Drumma Boy’s mixtape “Welcome to my city” at www.drum-squad.com
Drumma Boy is also running a competition exclusively with Flavour wherea artists, writers and producers can get the opportunity to work with him. To be in with a chance send a picture of yourself an example of your work and a 40 word bio to info@flavourmag.co.uk