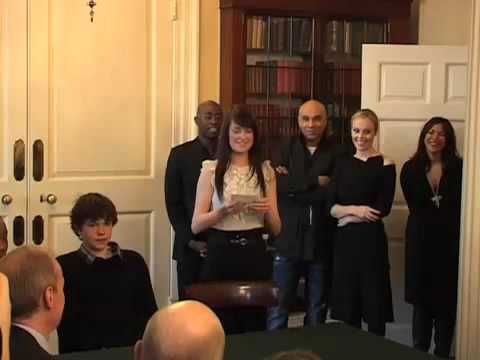 Thought you would never have the chance to shake things up unless you ran for Parliament? Well a unique competition on Bebos Big Think, made it possible for three young people to do just that. Pearl Boateng 21, David Berrill 17 and Danielle Burns 24, all took part in the Government run campaign set up on the social networking site, which allowed young people to submit ideas on how to handle unemployment, climate change and crime. Thousands of applicants were whittled down to six finalists who had the chance to put there concepts to a panel comprised of Cabinet Office Minister Tessa Jowell, musician Goldie, record-breaking young mountaineer Jake Meyer, Apprentice winner Michele Dewberry and Prince’s Trust head of policy and development Ginny Lunn. The panel picked the three winners who presented their ideas at the end of a Cabinet meeting on the 1st of December. Pearl from Tottenham came up with the idea to set up centres for young people who would otherwise turn to crime, Surrey based David put forward a networking site to connect the unemployed under 24, giving them part time, temporary and weekend job opportunities, while Danielle from Belfast called for employment evening to help young people find jobs.

Three runners up also got the chance to head to Downing Street and meet Gordon Brown at No10.

Speaking after the event, Prime Minister Gordon Brown said: “I am glad so many young people have got involved with the Bebo’s ‘Big Think’ and are debating important issues such as crime, climate change and jobs. It was fascinating to hear the ideas from David, Pearl and Danielle today and hear how young people feel we should deal with these challenges facing their generation.” These words undoubtedly leave us with food for thought. At only 17 David made history by being the youngest ever person to address cabinet ministers. Its possible to make your voice heard to the leaders of today because inherently you are the leaders of tomorrow.

Since Bebo’s Big Think launched in July 2009, it has been viewed almost 220,000 times and there have been more than 40,000 comments and poll engagements. Back in July, 5 people under 24 won the opportunity to meet the prime minister at an event hosted by T4s Rick Edwards.

You can join this independent youth-led online forum to discuss your views on the future of Britain as part of the Building Britain’s Future conversation: just head to http://www.bebo.com/bigthink