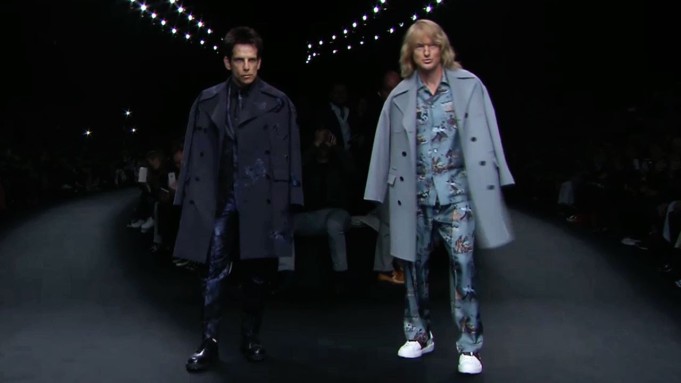 It’s been 15 years since the man behind Blue steel, Derek Zoolander, hit the big screen but can this kind of humour stand the test of time and evolve into the new world? The answer is a big resounding no, not even the endless cameos can save this run(a)way disaster.

A lot has happened in the 15 years since we last saw Derek Zoolander (Ben Stiller), including the collapse of his school and the death of his wife and when he was found not coping very well looking after his son, Derek Jnr gets taken away from Zoolander who goes into hiding to live like a hermit (crab). The collapse of the school also had a tragic impact on the beautiful Hansel (Owen Wilson), who has now left the fashion business to find himself in the middle of the desert with his ‘Orgy’ which is lead by a very much in love Kiefer Sutherland, who later suffers a ‘miscarriage’ yes this is the most outlandish part of the script you’re going to get. However, when some of the world’s most famous beautiful faces, including Justin Beiber, are being killed off, the fashion police lead by Valentina (Penelope Cruz), a failed swimwear model who couldn’t make it into print or high fashion modelling because of her impressively large breasts, calls on the pair to help save the world. Amongst all the mayhem Derek realises he wants his son back but in order to bring the fashion world back to order and to save his son he has to thwart the evil fashion crime king Mugatu (Will Ferrell).

At this point, there seem to be one too many sub-plots going on which all eventually lead into one resulting story. It doesn’t make it hard to follow but does come across just a bit of a mish-mash of stories without any real structure. We go from Derek and Hansel being humiliated on a fashion runway by transgender All – played by a superb Benedict Cumberbatch who seems to be rather pretty without his eyebrows – to Hansel’s oddly placed harem of men and women he call’s Orgy, to the fact that Derek jnr has been kidnapped because his blood consists of the fountain of youth which a coven of designers including Hilfiger, Marc Jacobs and more all want to get their hands on…. it just goes on and on and on. It seems the world of celebrity all wanted a cameo appearance in the sequel and from the extravagant costumes, effects and settings it does cross the mind whether they actually paid a fee to be part of this movie. There is no doubt this will pull in crowds due to the sheer sentimentality that has grown from the original. Zoolander has a freakishly loyal fan base it can count on and it’s with these people it will solely rely upon.

Zoolander 2 is out in Cinemas 12th February