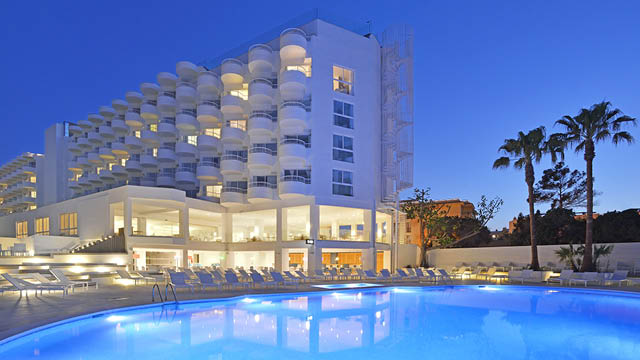 Ibiza party season is in full swing and for those of you wanting to ditch the autumn blues, you’ve still got time to jump on a flight and stay at the Sol House Mixed by Ibiza Rocks Hotel.

The Sol House Mixed by Ibiza Rocks is located in San Antonio and is roughly a 20 mins taxi ride from the Airport. Whoop whoop! If you are looking for an amazing mix of sun, sand, sea and soiree’s, then look no further than Sol House.

The newly revamped Sol House Mixed by Ibiza Rocks is a 4 star hotel fully renovated in 2016 with direct access to Punta Pinet beach. Pulling up to this chic hotel, with brightly coloured murals on the wall immediately invoked a carnival-esque feeling, and got us in the party holiday mood.

Here’s 10 reasons to stay at the Sol House Mixed by Ibiza Rocks Hotel.

As you walk through the cool airy lobby you’ll feel the young fun and fresh vibe it has to it. Being brand spanking new, it’s clean, it’s fresh, it’s funky, with big day beds for guests to lounge on to escape the heat, and to chill out in a comfortable zone.

Beyond the lobby is the pool, surrounded by sun loungers with a House DJ spinning the tunes. There’s also a small gym next to the pool for those of us that are truly dedicated to the body beautiful, ahem, I however didn’t quite make it in there.

You can literally step onto Punta Pinet beach from the pool area. Giving you the best of both worlds and when you turn back you can appreciate the full glamour and design of Sol House Hotel. This is where you will spend long relaxing days soaking up the sun and recovering from the festivities of the night before.

The rooms are small and cosy but it has everything you need, we even had our bed covered in balloons on arrivals.

The shower rooms are beautiful, with a powerful over the head shower, which literally revitalises you like rain drops. The bathroom large stone tiles on the floor and walls, as well as marble around the basins and of course a bidet (how very european).

The rooms also have a good selection of toiletries including sunscreen and aftersun which was a great. Although they lacked a shower cap, which for me is essential. All house rooms come with a 42-inch flat-screen TV, air-conditioning, free Wi-Fi, safe, a minibar, private balcony, and full bathroom with shower and hairdryer.

Believe it or not, good wifi makes such a difference on holiday and the Sol house wifi is amazing. I have never stayed in a hotel that had such strong wifi, so strong you could even use it on the beach which made taking photos and uploading to instagram timeless.

Sol House rooms come with bed and breakfast as standard when you book. The restaurant had a good spread for breakfast, you could choose from a continental breakfast or opt for something hot. This starts at 8-11am, which initially I thought was a good thing, so we wouldn’t have to rush in the morning to get down for breakfast after a heavy night.

Turns out it would have been quite handy to stroll in from partying at 7am (typical ravers) and for breakfast to be on the table. We almost missed breakfast every day as we fell asleep by 7am.

Luckily one of the cafes by the pool has an all-day breakfast menu, and our hanger (that moment when your hunger makes you angry giving you hanger) was settled, although if you order a full English it comes with a saveloy rather than a sausage.

I thought the pool downstairs was pretty spectacular, but when I went up to the rooftop bar, I was blown away. It made me feel like I must be a really fancy person to be here. Sun loungers, bar, of course, a house DJ, as well as an infinity pool with views looking out towards the bay. This was breathtaking! Open daily from 11 am – midnight, the Rooftop Nine has acoustic acts and special guest DJ’s every night for Sol Sets sessions. DJ Jose Padilla brings his famous Balearic beats to Rooftop Nine every Tuesday and a trip into classic house with History of House. See the full listings here.

We got to party on board the warship boat, which was a slight challenge for some of the passengers who were unfortunately overcome with sea sickness, but for the majority, they were ready to party hard in the sunshine.

With a stop off somewhere near a remote bay, we got to jump, slide or dive off the back of the boat into the warm Mediterranean sea. And as if that wasn’t enough, as we danced in the sunshine to hip-hop and garage music we saw a speedboat approach us with the one and only So Solid Crew; Harvey, Romeo and Lisa Mafia who waved to us as they circled our ship a couple of times before they boarded the WARship.

That was one of the best entrances I have ever seen. To have the realisation that we were now about to party with So Solid as they rocked the mic and hyped up the party, it was ridiculously good. They teased us by not playing any of their own songs as they were saving it for their evening performance.

If you buy a warship ticket and an Ibiza rocks ticket for the evening event it’s best to buy them as a package deal as it’s cheaper. Check it out on the Ibiza rocks website.

We arrived for the So Solid performance, and they were insane. It wasn’t too crowded, the stage is up high so you have a good view no matter where you are. They brought hype, energy and lyrical talent, as they performed an array of songs from their repertoire, including 21 seconds, some of their solo songs and even a bit of Craig David. When Harvey told all the men in the audience to take their shirts off, none of us was complaining, especially when he led by example *drool* that man’s still got it.

What a time to be alive👏🏽✨ @fusionfest in Liverpool tonight then @TS5 @ibizarocks Pool Party Sunday 🌴☀ #TS5 pic.twitter.com/B5nbixFBsL

All Saints at Ibiza Rocks - Photo: Luke Dyson
1 of 4

For more info or to book your holiday now, simply visit booking.com you will not regret it.