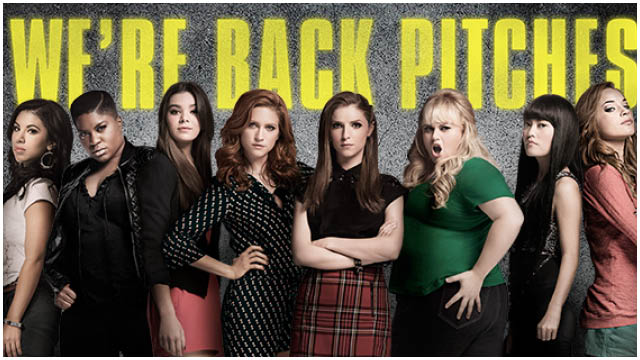 For those of you who waited patiently for three years for the sequel to Pitch Perfect and those who are already petitioning for Pitch Perfect 3, the second movie is out on Blu- Ray and DVD on the 21st of September 2015. In case you still haven’t thought of a reason to splash the cash, here’s 10 reasons to own Pitch Perfect 2 on DVD or Blu-Ray…

1. The Pitches are back

Everything you liked about the first film is back in the second and if you missed the first here is the ‘Perfect’ excuse to invest in a boxset and stay in. Great news now the weather is rubbish and we need a reason to stay in, which leads us to…

If having a musical party — or sleepover — is pretty much how you wanted to spend your evening then you now have two films you can stick on and sing along to… Instant karaoke, justt add subtitles. Plenty of simple songs and classics and best of all, the worst singers (guilty) get drowned out by the best.

In the modern age it’s rare that a film doesn’t just pass the Bechdel test, it aces it. Not only do you have every single speaking role named (which one is Jessica and which one is Ashley again?), it also involves no actual conversations about men between two women. This film has some great characters, mostly women, doing what they love and proving that neither our gender or our choices define us.

4. Sending up the music industry Full of people earning too much money, a tonne of unpaid interns and a wealth of ridiculous insults, record producers are probably some of the easiest people in the world to send up. Luckily they really do earn a lot of money so are probably not losing any sleep over cinema audiences laughing at the idea of Snoop Dogg ‘s Christmas remix album (would totally buy that, by the way).

5. Everything Rebel Wilson says and does

The woman who once claimed to Conan her ‘B*tch’ bling was an heirloom from her grandmother is back and her one-liners are as hot and fast as ever. You get the impression that the director just gave her a script and let her write her own lines into it. But don’t worry, Fat Amy isn’t just there as the comic relief, she has her own personal walkabout too. It’s genuinely touching. And still hilarious.

We all love a good blockbuster film but honestly, sometimes you have to check that the US isn’t taking itself too seriously. The fact that someone can write the lines ‘America never wins because the rest of the world hates us’ and know they’re marketing to an international audience restores a little bit of hope. Hopefully the United States is laughing with us…

How many films can you say include a bunch of talented singers competing by mashing up genres of songs in big groups? Honestly, if you’re not already a mash-up addict then this will get you hooked. The entire premise of getting a whole bunch of super awesome voices then getting them to sing with and over each other is genius to begin with; add the fact that they’re doing ‘songs about butts’ of ’90s jamz’ and it’s pure entertainment.

This may seem a bit cruel, but hear us out on this…Hipsters have been around since the dawn of time. Well, before the dawn of time, when it wasn’t yet cool and no-one else had showed up. So having a giggle at people spending too much time on YouTube and being addicted to ethnic take-out for lunch is not exactly unfair. Don’t worry though, it’s very sympathetic to the plight of the average social crusader trying to get their local fast food joint replaced with a retro vegan diner. The original PP cast are all graduating! This is both heartbreaking and inevitable. Just like our own struggles post-university. Now more than ever it feels like there aren’t many opportunities and the ones you do make are often terrifying. Better to stay where you are and panic, right? The overall theme of this is that even when you leave, part of you stays and that continuing on doesn’t mean you leave important things behind…*tears up*

10. President of the US Barack Obama and First Lady Michelle

Genuinely wanted to put this at the top but it’s a bit of a spoiler for the first five minutes of the movie so hoping if you made it this far you already know why Mr President and the stunning Michelle are making an appearance. It’s rare you get a couple that have masted the synchopated deadpan expressions, nevermind in a popular movie about acapella groups. Genius.

Honestly, Flashlight was not the best Jessie J song every (Price Tag, anyone?) but the music video and raw emotion behind the ‘live’ acts of PP2 make this a tune worth mentioning. And downloading. And learning the words to. For the aforementioned karaoke evening, if nothing else.

Order your copy of Pitch Perfect 2 NOW from Amazon