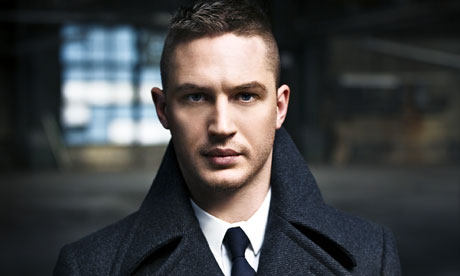 On September the 15th, 1977 in Hammersmith, London, Edward Thomas Hardy, or as we know him, Tom Hardy, was brought into the world and for that we are forever grateful to his parents.

Over the past few years Tom Hardy has been ever present on our screens, either through TV or Film he has proved to be a massive acting talent and to be honest oh so sexy, a major hit with both male and female audiences worldwide. So, because of this, we have decided to give you a round-up of the 10 reasons why WE LOVE TOM HARDY.

He first hit our TV screens in Band of Brothers in 2001, then going on to star alongside the likes of Ewan McGregor, Josh Hartnett and Eric Bana in Black Hawk Down, his acting career started off on a major high. He has since gone on to play a number of different roles such as the human clone of Jean-Luc Picard in Star Trek: Nemesis, The lover of Elizabeth the 1st, Robert Dudley, in the Tudor based TV series The Virgin Queen, A homeless alcoholic (not quite so hot in that roll but he can be forgiven for that) in Stuart: A Life Backwards with Benedict Cumberbatch, a Gay gangster in RocknRolla, a mixed martial arts fighter in Warrior to Bane, the evil arch nemesis of Batman in the Dark Night Rises, the list is endless. I really don’t think I have to explain myself too much on this point, not only has he got a body to die for (jump in the queue ladies I’m first to get my hands on him). He has to be one of the most beautiful men to grace this earth, this is not only my view, he has been voted the Sexiest Man Alive for many a poll, actually way too many to mention here. As a teenager, our Tom had a battle with many personal demons. Not only was he addicted to Drugs and alcohol he was a delinquent and spent many a night in jail for disorderly conduct and was even once arrested for stealing a car and gun possession. He even blames his wild ways for the breakup of his 5 year marriage to his ex-wife Sarah Ward. Thankfully for us he mended his bad boy ways otherwise we wouldn’t have that body to drool over.

FAVOURITE MOVIE MOMENT: Bronson, the Prison scene, where he fights the prison guards, completely butt naked. I could watch that on repeat for days.

Tom is devoted to his charity work; right now he is currently the patron of Flack, a social enterprise and registered charity based in Cambridge, which benefits the homeless. He currently has a just giving page with the aim to raise £50,000, because of his role in Stuart: A life backwards he become very aware of the challenges the homeless face. The charity means a huge amount to him personally because of the issues he has faced in his own life. Some of the other charities he has worked with are the Bear with me Illustration project in conjunction with The Great Ormond Street Hospital and is an avid supporter of the Prince’s Trust, Help for Heroes, Bowel Cancer research and Breakthrough Breast Cancer.

Tom become a father in 2008 to a son, named Louis, by his then long term girlfriend. The birth of his son was the turning point in his life. Many of his tattoos are dedicated to the deep love he has for his offspring including the phrase “Padre Fiero” meaning proud father. He states “I’ll do anything I have to do to clean up my act and be a better father “Do they still have kiss chase in schools these days? I can imagine Mini-Tom is very popular with the 5 year old girls in his school.

What makes a man a REAL man, the ability to admit they have a feminine side, Even though he is known for playing quite a few, VERY SEXY, masculine roles, Tom proves, quite unashamedly, he certainly has this in abundance with his love of shopping, he has a bit of a “thing” for shoes, he is spiritual, has a love of Dogs and he actually saved a kitten & made sure it went to a good home (can’t you just imagine him climbing a tree in a fireman’s outfit?), Now that is just a bit too cute.

He always gives 200% to every role he takes, “There comes a point where if you want to participate at a certain level in anything, you cannot just turn up and be respected,” Tom proved this with the amount of hours he spent in the gym for his role in Warrior, Many hours were spent doing weights, boxing, Muay Thai, Jiu Jitsu and the choreography needed to build himself up and deliver an exceptionally outstanding performance. He certainly doesn’t shy away from hard work. Well I don’t know about that really but he isn’t afraid of getting stuck right in and has been known to carry out his own stunts, now considering some of the roles Tom has played this can be extremely dangerous and quite frankly just a little painful as, again, while making Warrior he broke his ribs, toe and actually tore a ligament on his hand, (how many of you would have loved to have nursed him better) Now that’s what I call dedication.

What makes Tom even more appealing (well even more so than those biceps) is his honest and candid personality; he certainly isn’t afraid of what others think of him and has always been extremely open about his personal life and life views. Tom has openly talked about how, in his younger days, he sexually experimented with both men and women but he is now very much straight, and as mentioned before, his battle with drink, drugs and crime. Whilst carrying out my research for this piece, I stumbled upon a story of a Dutch girl with terminal cancer who had travelled over to the UK to meet Tom at a signing in London; Tom was told of her condition by her friends and actually stopped the signing to spend some time with this girl in private, Tom insisted on having some photo’s together and a friendly chat and also gave her a T-shirt he had worn on a charity trip aboard and signed it with her. The story was so touching, I actually found myself shedding a tear, to provide this girl with such great memories for the last few months of her life was just a little too much for me to bear.

So there you have it, 10 reasons why we LOVE Tom Hardy, if you think I have missed anything then leave your comments below. I wonder, If we all tweet this article to Tom, do you think he would retweet us?