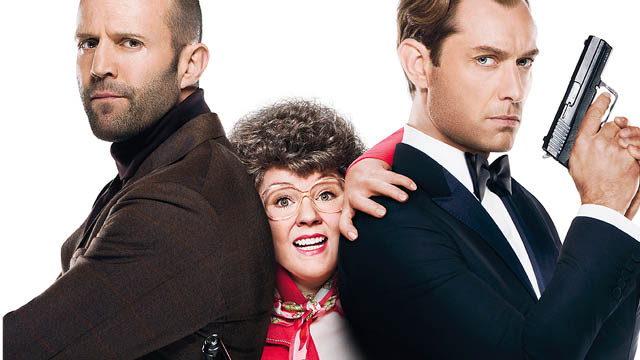 Plus here are the photo’s from the London Premiere.

To celebrate the release of Spy in UK cinemas on the 5th of June we have put together our 5 reasons you need to watch Spy Movie + Win a pair of tickets to see Spy in cinemas.

Make sure you check out the trailer as the answer to our question to win tickets to a screening of Spy before it’s released in a number of selected cinemas across London, is in it. To win tickets simply answer our question at the bottom of the article.

Susan Cooper (Melissa McCarthy) is an unassuming, deskbound CIA analyst, and the unsung hero behind the Agency’s most dangerous missions. But when her partner (Jude Law) falls off the grid and another top agent (Jason Statham) is compromised, she volunteers to go deep undercover to infiltrate the world of a deadly arms dealer, and prevent a global disaster.

Our Top 5 Reasons to Watch Spy.

1. Jude Law is representing the UK.

Well he may not be the only English actor representing the UK in Spy but he has to be the best looking (Sorry Jason Statham). Law plays Bradley Fine, some would say he looks rather dashing as he plays a rather clumsy Bondesque type character. We all know and love McCarthy from her role in Bridesmaids, Identify Thief, The Heat amongst other Film and TV shows she has appeared it. We couldn’t think of a better female advocate to unleash lots of silly girl power belly laughs which will have you wishing you had a portable toilet.

An action film without Jason Statham just isn’t worth watching, He is the king of bad ass fighting  and no nonsense talking,  who doesn’t love that I don’t give a F*%k face he pulls in every single film. He knows what he’s good at and sticks to it, there is nothing wrong with that.

We love it when musicians appear in film and 50 cent loves to pop up when you least expect to see him. We can’t wait to see if he really fits into a comedy, May be we might see a completely different side to fiddy. 5. Everyone loves a good comedy right?

Whether you’re feeling down, in need of some light relief or just want to escape into a world where stupidly hilarious RULES we couldn’t think of a better film to watch. You’ll snigger, you’ll nearly wet yourself, and you’re guaranteed to have a good old belly laugh. So if you fancy winning yourself a pair of tickets to a preview screening on the 28th of May at one of the following locations just answer this question.

In the full length trailer clip, Susan Cooper (Melissa McCarthy) is given a new identity, what is her new name?

Send your answers to comps@flavourmag.co.uk along with your full name and mobile and be sure to write SPY MOVIE in the subject header. Winners will be chosen at random on 23rd May. Good Luck

Screening’s are taking place at the following locations in London;

We got 15 pairs of tickets for each venue above, so the chances of you winning are even higher. Don’t delay, answer the question today.

SPY is released in UK Cinema’s on the 5th of June.