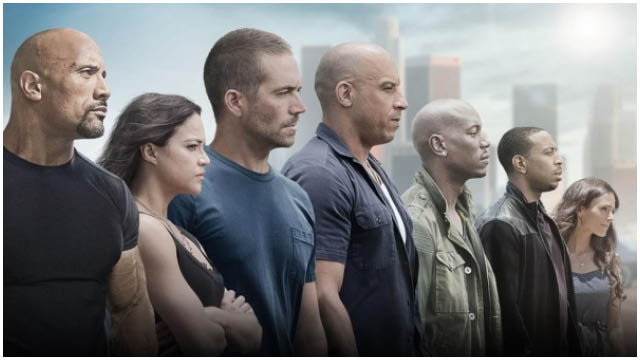 Well the Fast & Furious 7 cast have done it again, reforming the old gang with the exception of Han, who gets killed off from basically the very start of the film, for another high octane exhausting adventure.

The boys may have gone their separate ways to live normal lives but they are forced back together when their adventures from Fast 6 follow them back home in the form of Jason Statham as Shaw, wanting to avenge his brother, Owen Shaw, death.  Of course in Furious 7, this one man killing machine sets his sights on Dom (Vin Diesel), Brian (Paul Walker) and the rest of the gang causing mayhem and distraction in his wake to get to the boys as they set out to rescue and protect the mysterious Ramsey, a highly intelligent hacker who has designed a device called “Gods Eye” but nothing is always that straight forward.

The script may be a bit shabby and well as for the dialogue… There really isn’t much of that but what there is of it we have in the form of silly jokes, delivered mostly from the mouths of  Ludacris and Tyrese, who’s facial expressions just seem to compliment that too. There isn’t any proper laugh out loud belly laughs but enough to satisfy and break up the serious amount of action. Really though anyone wanting to see this instalment of this very successful franchise really aren’t going to see an Oscar winning film.

What can you expect from Fast 7? Well pretty much the same as the previous 6 films, Lots of sexy high end cars, one that gets totally trashed (don’t cry car geeks), scantily dressed hot looking woman dancing around, with an emphasis very much on the women’s derriere, no seriously every time there were a group of hot woman on the screen the camera focused in and lingered, you men are going to love it, us woman may feel a little bit inadequate though. Oh and did I forget to mention lots and lots and lots of action and violence. Massive blinding explosions, speeding skilful car chases, silly acting and a hell of a lot of bro love going down.

There are many ridiculous scenes that stand out, but one that will have you on the edge of your seat see’s Paul Walker escaping from a bus that is half hanging off a cliff, as it slides of the cliff he manages to run up the outside of the bus as it falls, makes a leap and lands on a car driven by Letty (Michelle Rodriquez) saving his ass from certain death. Ridiculous is pretty much the theme throughout.

The one good thing about Fast 7 is it has the ability to laugh at itself and the cast seem to laugh at themselves too. You can tell these guys really have become a family on screen and off, Chemistry in these kind of films are all too often lacking but you can feel the love these guys have for each other. With the death of Paul Walker it was reported that some scenes had to be re-written and even added to cover his loss. If you watch closely enough and maybe if you have a trained eye you will be able to tell when Walker’s brothers Cody and Caleb were used as stand-ins and I even noticed a quick glimpse of a CGI enhanced moment to. Obviously the end scene was written into the script to explain why we won’t be seeing any more of Walker in this franchise (well apart from his real life tragic accident), respectfully the writers have just retired his character and not killed him off. Finally, the most poignant moment throughout the film, which will leave not a dry eye in the house, even that of grown men was the emotional tribute to Walker himself. Showing how much love the Fast & Furious 7 cast they really did have with their brother.

Fast and Furious 7 is ridiculous, silly and totally exhausting but it is so much fun with a lot of heart everything about it says you should hate it but you just can’t help but enjoy it and I for one love this damn franchise.